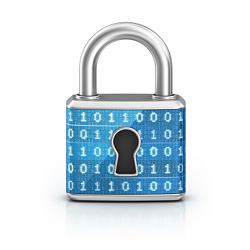 You’ve probably heard of public-key cryptography, because it’s the basis of HTTPS, the system that puts the padlock in your browser.

The mathematical detail behind public-key crypto is a little abstruse, but you don’t need to be a mathematician to understand the principles that make it work.

Traditional encryption (before 1970, at any rate) relies on the digital equivalent of a padlock. Turn the key clockwise to lock; turn the key anticlockwise to unlock.

If you want to share data securely with someone else, you have to make a duplicate of the key and send it to them. So you have to find a secure way of sharing the key first, typically with a face-to-face meeting, or through a trusted courier.

This is known as symmetric encryption, because you use the same key to encrypt and decrypt.

It doesn’t scale very well, and it doesn’t lend itself to online security, where you want a secure way of communicating with someone you’ve never met, and probably never will.

Public-key encryption (invented in the 1970s) relies on a funkier sort of padlock. You have two keys, either of which can be used for locking. But once the padlock is locked, only the other key can unlock it.

Choose one of the keys to be a public key, and let anyone who wants make a copy of it. Publish it online if you like.

Keep the other key private.

Now, anyone who wants to send you data securely simply locks it with their copy of your public key. Once it’s locked, no-one (not even the person who locked it) can open it, since the private key is needed for that purpose.

Originally, public-key cryptography was called non-secret encryption. That name was meant to denote that the public key didn’t need to be kept secret, so face-to-face meetings or trusted couriers were no longer needed for key exchange. But it’s not a very good name because it implies an overall lack of security.

It is now universally known as public-key encryption, or asymmetric encryption. It’s asymmetric because different keys are used to encrypt and decrypt.

You’ve probably realised that the key to public-key encryption, so to speak, is that only your public key is ever made public.

A surprising number of people, including many who should know better, don’t seem to realise that, which is why fellow Naked Security writer Julian Bhardwaj emailed me this morning with a mixture of amusement and alarm when he saw this tweet from Stackoverflow co-founder Jeff Atwood, better known as @codinghorror:

(Stackoverflow is a question-and answer-site for professional and enthusiast programmers; Github is a popular online source code repository for that same community.)

The search reveals cases where coders have generated a public/private key pair for secure communication with Github, and then uploaded the wrong key.

Whilst this search now returns no results (kudos to Github for a fast response), just over an hour ago it was returning 80 pages of people's private keys...perhaps time for a quick reminder about keeping private keys private?

If you are determined to produce your own key pairs, do yourself a favour and be watchful which one you give out and which one you keep. (The names public key and private key are supposed to make it easy to remember!)

Most key generation programs try to help you get it right by annotating the key files to make their content really obvious.

With SSH, for example, you use the ssh-keygen program, like this: Or like this if you used a passphrase (you ought to, unless you plan use the key in an automated process when you won’t be around to type in the passphrase):

Your public key, which is the one you’re supposed to upload to Github, looks like this:

Things are much the same with SSL keys. Private keys are clearly labelled like this:

Public keys are similarly annotated. You don’t get passphrase-protected public keys (they’re supposed to be public, after all) so they all look something like this:

Not too tricky, is it?

For all the software you’re likely to use, such as OpenSSH, OpenSSL and GPG, private keys are labelled with the text PRIVATE KEY.

And that’s the one you’re supposed to keep private!

4 comments on “Do programmers understand the meaning of PRIVATE?”