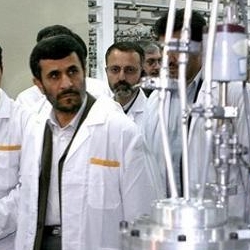 Federal investigators in the US are tightening the screws on former senior government officials who might have leaked info about the Stuxnet worm, according to The Washington Post.

As Naked Security recounts here, the Stuxnet virus was seemingly created by the US, under the regime of President George W. Bush, to target Iran’s nuclear facility in Natanz.

The US pulled Israel into the cyber-espionage effort, with stunning results.

Those results included slowing down and speeding up a centrifuge’s delicate parts, which resulted in damage so extreme that, according to The New York Times, debris from a damaged centrifuge was laid across the conference table at the White House’s Situation Room to demonstrate the malware’s potential power.

But the obligingly destructive Stuxnet spun out of control and escaped into the wider world, damaging systems well beyond Iran.

In spite of the virus going maverick, President Barack Obama secretly authorized continued attacks, according to the NYT. The code name for the Stuxnet operation was Olympic Games.

Olympic Games, indeed: The administration’s efforts to find and punish those who informed the press about Stuxnet are reaching strenuous levels.

One person familiar with the investigation told the Washington Post that prosecutors are pursuing “everybody – at pretty high levels, too… There are many people who’ve been contacted from different agencies.”

That includes several current and former senior government officials. The Washington Post reports that investigators are confronting these high-level officials with evidence of contact with journalists that’s based on extensive analysis of their email accounts and phone records.

Six officials have already been prosecuted for disclosing classified information, and more senior-level officials may yet be implicated.

The FBI’s manhunt has been aided by increasingly sophisticated data-crunching tools to sift through huge volumes of email.

Outside of its use in investigating Olympic Games leaks, such data-crunching technology has led to one recent prison term—that of John Kiriakou, a former CIA officer sentenced on Friday to 30 months in prison for disclosing to a journalist the identity of an undercover CIA officer – and the high-profile resignation of Gen. David H. Petraeus, who resigned as CIA director after the FBI discovered emails implicating him in an extramarital affair.

Glenn Greenwald at The Guardian has written an extensive and thoughtful post about how the Stuxnet leaks investigation demonstrates, in his opinion, the Obama administration’s devotion to maintaining and increasing its secrecy power. It’s not hard to come to the same conclusion that Mother Jones did: war has been declared against whistleblowers, and the administration is taking it to what some believe are troubling extremes.

The worry is that we are all suffering loss of privacy due to increasingly sophisticated and ever-more-intrusive surveillance techniques.

But what’s particularly alarming is the idea of would-be whistleblowers being intimidated to the extent that they might not fight for transparency into the government’s actions.

"Given how subservient the federal judiciary is to government secrecy claims, it is not hyperbole to describe unauthorized leaks as the only real avenue remaining for learning about what the US government does - particularly for discovering the bad acts it commits. That is why the Obama administration is waging an unprecedented war against it - a war that continually escalates - and it is why it is so threatening."

May those who seek government transparency keep a close eye on the FBI’s use of data-crunching and how it can be used against them.