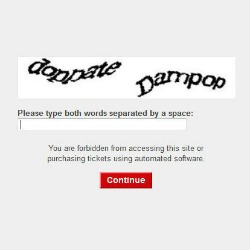 Human? Not a robot? Says you! Take this test to prove it:

What’s at times essentially illegible, fuses characters together into melted blobs of unrecognizable goo, and occasionally tells you to go f**k yourself?

If you answered “CAPTCHA”, congratulations – you’re made out of carbon!

Because of this, it’s unlikely you will robotically buy up reams of tickets and sell them at vicious markups, and therefore, Ticketmaster, the world’s largest online ticket retailer, will be happy to sell to you.

Now, though, Ticketmaster is going to sell tickets without torturing your eyeballs with the use of CAPTCHA.

According to the BBC, Ticketmaster has dumped the reviled challenge-response test and put in its place software created by Solve Media, which achieves the same robot-screening ends by asking for well-known phrases, descriptions of brands, or with simple multiple-choice questions.

They typically consist of typing letters and/or digits from a distorted image. Or messages, as noted, to go pleasure yourself. Or, then again, mathematical problems that make your brain bleed.

Or, as with the Civil Rights Defenders group, a multiple-choice test to prove you’re not a homophobic creep. Or, sometimes, a tricky extra character or two.

For some reason, people don’t like these CAPTCHA tests.

Lord Teapot, a commenter on the BBC story, said that he or she finds these tests so distasteful, he or she gives up and buys from another site after the first failed attempt:

Lord Teapot
30TH JANUARY 2013 - 15:57
I will generally attempt a CAPTCHA once. After that I seek another site to purchase/view/etc the material I was seeking. Some of the CAPTCHA images are essentially illegible, tend to contain multiple characters that seem to be fused together into unrecognizable masses, and other nonsense that makes the entire scheme a complete [hassle]. Find a legitimate way to ID humans, or we find other sites. Revenue-harming disgust caused Ticketmaster to rethink the use of CAPTCHA.

According to the company’s executive vice president of e-commerce, Kip Levin, preliminary trials show customer satisfaction is ticking up, and security hasn’t suffered.

He told the BBC:

"We're starting to see an uptick in fan satisfaction."

"We're happy with what we've seen from a security standpoint as well."

Levin also told the BBC that the new system has halved the time users take to puzzle out an answer: average time to solve a CAPTCHA puzzle was 14 seconds, while the new system took users an average of 7 seconds.

As far as security goes, it’s time for us to find a better method. Back in 2008, spammers were achieving a CAPTCHA success rate of 30% to 35% for Microsoft’s Live Mail service and a success rate of 20% against Gmail.

But, as Sophos’s Graham Cluley noted this past fall, nowadays, spammers are simply outsourcing the cracking of CAPTCHAs to impoverished workers in the third-world, to whom they pay a pittance for completing thousands of puzzles each day.

And there’s no reason to believe that such a technique won’t work just as well against Ticketmaster’s new system.