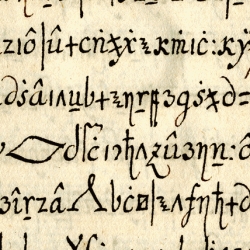 A cipher is a method for encrypting messages to keep them safe from prying eyes.

Until the advent of the digital computer, ciphers relied on pen-and-paper or mechanical techniques, and were often much more easily cracked than their designers ever thought possible.

In the words of the eminent historian of ciphers, David Kahn:

"Few false ideas have more firmly gripped the minds of so many intelligent men than the one that, if they just tried, they could invent a cipher that no one could break."

In no particular order, here’s a quick round up of notable solved ciphertexts over the last five millennia.

Roman Catholic Mary, Queen of Scots was put under house arrest by her Protestant cousin Queen Elizabeth in 1568.

After 18 years of imprisonment, a plot was hatched by Anthony Babington to free Mary, assassinate Elizabeth and start a rebellion supported by a Spanish invasion of England.

Mary conspired with Babington through the exchange of encrypted letters, using a complex substitution cipher with more than 63 different symbols to encrypt letters and words.

Nevertheless, Elizabeth’s spymaster Walsingham was able not only to read their correspondence but also to forge messages of his own to extract more information from the conspirators.

Babington went to the gallows in 1586 and the following year, Mary was executed for treason.

German foreign minister Arthur Zimmermann sent an encoded telegram to Mexico to encourage it to declare war on the neutral United States. The telegram was intercepted by a British cryptography team known as Room 40, who set about decoding it.

William Montgomery, along with other British cryptanalysts, was able to use other similarly-coded telegrams to crack it.

On 1 February 1917, Germany announced resumption of “unrestricted” submarine warfare, leading to the breakdown of relations with the United States.

On 19 February, the decrypted telegram was passed to the US, further hardening US opinion until, on 6 April, the US declared war on the German Empire. On 20 May 1942, the US intercepted a Japanese message detailing an attack on an island in the Pacific.

A delay in the Japanese issuing new codebooks meant that the Allies could decrypt nearly all of it and learnt of the attack, but doubt remained as to which island the code ‘AF’ referred to.

Midway was suspected so the base there was asked to transmit a message saying their water distillation plant had been damaged.

The Allies then intercepted a Japanese message reading ‘AF short on fresh water’ confirming the target of the attack was Midway and allowing the Americans to mobilise their fleet and win a critical fight in the battle for the Pacific. There is little difference between the challenge of reading a message deliberately encrypted to obscure its meaning and a dead language whose meaning died out centuries ago.

The written language of the Ancient Egyptians baffled archaeologists and linguists alike until 1799 when the Rosetta Stone was discovered by Napoleon’s invading army.

Containing the same text written in three different languages (Greek, Demotic and Hieroglyphics), it acted as a cryptanalytic crib.

The decryption of a language that hadn’t been spoken for over eight centuries permitted historians a much better understanding of the ancient civilisation.

Secret societies and ciphers go hand-in-hand. For more than 260 years the contents of this 105 page encrypted manuscript were a mystery, until April 2011 when a team of Swedish and American linguists used statistically-based machine translation algorithms on modern computers to unscramble it at last. The complex substitution cipher which once protected the secrets of the initiation ceremony for the occultist order of Wolfenbüttel fell foul of modern computing power. Edgar Allan Poe, American author, editor and hobbyist cryptanalyst, encouraged readers of his newspaper to send in encrypted messages which he would then crack.

After having solved over 100 ciphers, he published two ciphertexts sent in by a ‘Mr W. B. Tyler’ which he hadn’t been able to solve himself.

More than a century later, in 1985, it was suggested that Poe had written the messages himself as a challenge to his readers. The first of the two was solved in 1992 but it wasn’t until 2000 that the second was finally cracked.

The significance of the decrypted messages, however, remain a mystery.

Chaocipher is a mechanical method of encipherment invented by John F. Byrne in 1918, and is a classic case of a cryptographer claiming his cipher to be flawless.

Byrne confidently published four ciphertexts, totalling over 10,000 letters, and offered cash prizes to anyone who could decrypt them. It seems, however, the strength of his cipher relied on the fact that only a select few people knew how it worked.

But obscurity is not security, and in 2010, after the inner workings of Chaocipher were published, two of the four messages were cracked.

Nevertheless, the other two remain unsolved. For over 200 years, there have been many attempts to locate hidden treasure supposedly stashed at the bottom of a pit on Oak Island.

In the early eighteenth century, an inscribed stone tablet was uncovered some 27m down.

The inscription, consisting of 40 symbols, is said to have been decoded as “Forty Feet Below Two Million Pounds Are Buried”.

Alternative decryptions have been posed, and some consider the stone tablet to be a hoax.

Whatever the case, the treasure has yet to be found.

Oliver Levasseur, aka La Bouche (‘The Buzzard’) was a French pirate in the Indian Ocean. After five years of looting, Levasseur was captured and executed in 1730.

As he was hanged, clutching a necklace displaying a 17-line cryptogram, he exclaimed to the crowd, “My treasure is buried here… find it who may.” Copies of La Bouche’s ciphertext have materialised over the years but despite many a search, the treasure has not been found.

After all this talk of lost treasure, beheaded queens and occultist socities, here’s a lighter note to finish on.

In his judgement, purely for his personal amusement, Sir Peter hid a cryptogram of his own, indicated by italicising certain letters.

It was cracked by Dan Tench, who found that it said, “Jackie Fisher who are you? Dreadnought”.

What’s your favourite story involving a ciphertext? Feel free to leave a comment below

25 comments on “The top 10 cracked ciphertexts from history”