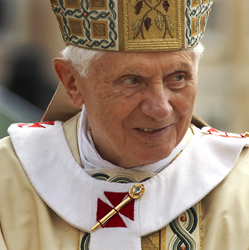 Within seconds of the news breaking that Pope Benedict XVI was to resign, spam began to appear on Twitter taking advantage of the story.

Messages using the hashtag #pope – but with no connection whatsoever with the developing news story of the first Papal resignation for hundreds of years – have sprung up on the social network.

Most of the messsages are being posted from accounts which feature images of young women in a state of undress (rather than a state of distress, which is what you would devout expect Catholic followers of @Pontifex to be feeling right now). What is happening here is what we see every day on Twitter – whether there is a Papal resignation or not.

Spammers scoop up the hottest trending topics on Twitter and use the popular phrases to sprinkle amongst their tweets – in the hope that social media users who are following a particular meme or subject will click on their link rather than a legitimate one.

Chances are that the accounts themselves are not being run by someone sat in their bikini at a keyboard, but actually automated bots under the control of a spammer who may have hundreds or thousands of bogus accounts at his beck and call.

Here are some other examples: These are hardly the most sophisticated examples of spam in the world, and at the moment appear to primarily be designed to make money through affiliate links. But it’s easy to imagine how cybercriminals can exploit interest in hot breaking news stories like this in order to drive traffic to poisoned webpages infected with malware or phishing sites.

We have already seen some of the links redirecting to webpages which claim to host adult videos: If you see an account which is obviously sending spam messages, report it to Twitter so they can shut it down. The site’s security team has an ongoing battle against spammers, but it’s a game of whack-a-mole. Everytime they zap a bogus account, the bad guys can create umpteen more.