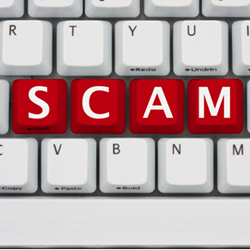 Naked Security reader Mark has been in touch, forwarding us a spam email that he received.

and b) they're advocating that you contact somebody from the UN via his... err.. Chinese Yahoo! address. You probably see a million like this but jeeeeeez."

Personally, I’m surprised that Mark didn’t comment on the arresting subject line used by the scammers. It would certainly make many folks stop for a second, and maybe click to read more. It’s true that more and more email scams appear to reference the commonly encountered scourge of bogus lottery emails, fictional inheritances and other advance fee frauds that are frequently filed under the title “Letters from Nigeria”.

If something sounds too good to be true, it almost certainly is – even if the people trying to dupe you are themselves warning about online scammers!

Although you may not be duped by such messages, it’s perfectly possible that you know someone elderly or vulnerable who might be. Always be on the lookout on their behalf, as a surprising number of easily exploited people have become financial victims in the past.

Scam spelt out on keyboard image from Shutterstock.