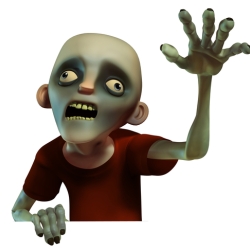 Chances are that you have seen pictures of hacked road signs, warning you that a zombie invasion is underway, and chuckled to yourself.

But would you be laughing as hard if your favourite TV programme was interrupted by an emergency alert telling you that the bodies of the dead had risen from their graves, and attacking the public.

Check out the following video, which shows what happened to Public TV 13 and CBS affiliate KRTV in Montana after someone hacked into the Emergency Alert System:

"Civil authorities in your area have reported that the bodies of the dead are rising from their graves and attacking the living. Follow the messages onscreen that will be updated as information becomes available. Do not attempt to apprehend or approach these bodies as they are considered extremely dangerous.

"I repeat, civil authorities in your area have reported that the bodies of the dead are rising from their graves and attacking the living. Do not attempt to apprehend or approach these bodies as they are considered extremely dangerous.

"This warning applies to all areas receiving this broadcast. Tune into 920AM to get information in the event you are separated from your television or if electrical services are interrupted.

"This station will now cease transmission, so please use your battery-powered radio. Tune into 920AM for information."

In case you haven’t already guessed – there wasn’t really a zombie uprising.

KRTV published an explanation for the unexpected interruption to their programming, but strangely didn’t refer to zombies. It isn’t clear how hackers managed to broadcast the emergency alert on the TV stations, but the most obvious line of investigation would be to examine if the alert service was only “protected” by a default password that could have been widely known.

Obviously, hacking into systems to broadcast bogus emergency messages via TV stations isn’t something that can be condoned. I’m sure that none of us find it in the slightest bit funny, and there won’t be a single Naked Security reader who is chortling inside.

But hey, it makes a change from a Dalek invasion, right?