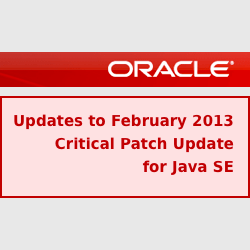 Seems like our report that Oracle’s Patch Tuesday had happened early was only partly true.

There was a Patch Friday on 01 February 2013, and it was accelerated by Oracle because it closed off exploits already known to be in the wild.

As far as we know, it succeeded in the job of blocking the attacks, and everyone was pleasantly surprised.

Turns out, however, that bringing the patches forward meant that some of them got left out.

So Oracle has now announced that there will be a Patch Tuesday after all, to top up Patch Friday to full strength.

By the way, Oracle describes the forthcoming update as cumulative, by which it means that it includes all the stuff from the previous update, too, in case you missed out at the start of the month.

That’s a good idea (unless you’re on a roaming data plan or some other expensive network connection, of course, and you already downloaded the previous update).

It ensures that you don’t end up half-patched, giving you a second bite at the cherry, so to speak.

Nevertheless, if you didn’t bother to get the previous update, I strongly recommend that you don’t just idle until the 19th, knowing you’ll catch up then.

Complaints about Oracle’s sluggish patching regimen, especially for Java, which gets three main updates a year in place of the quarterly fixes for other Oracle products, have been pretty vocal in recent years.

Now that Oracle seems to be finding some velocity and the willingness to “patch early, patch often,” take ’em up on the offer!