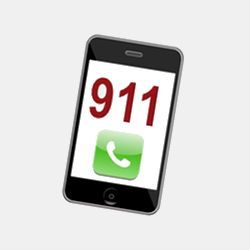 A YouTube video showing you how to unlock an iPhone 5 without the passcode has racked up nearly 300,000 hits over the past two weeks.

There are some caveats, though:

I’m not going to repeat the instructions here.

I’ll just say that they’re reasonably arcane: you almost turn the phone off twice during the process, as well as actually placing an emergency call but cutting it off before it goes through.

For the last reason alone, I invite you never to pull this trick, even on your own phone “to see if it works”.

Deliberately dialling the emergency services when you don’t need to, or, indeed, when you know your intention is not to complete the call at all, is a pretty poor show.

I’m not sure what the regulations are in your country, but there’s every possibility you could get in trouble with the authorities for that part of the trick alone.

In fact, it’s not really a trick. It’s a crime, even without the bogus emergency call.

Not, perhaps, a terribly serious crime. But mucking around with other people’s computers is behaviour we ought to stamp out of our lives.

Interestingly, the last time we wrote about this sort thing was when an MP in the New South Wales parliament live-tweeted joke comments from a colleague’s iPad while the latter was giving a speech.

I suggested a zero-tolerance policy, especially from members of a legislative assembly, who ought to be setting standards, not flouting them, but not everyone was so sure.

→ For the record, I would vigorously oppose any attempt to regulate whoopee cushions. Like Dr Sheldon Cooper of the Big Bang Theory, “I still maintain the whoopee cushion has comic validity.”

The good news is that this unlock crime trick doesn’t give full access to the phone, but apparently only to your contact list, voicemails and photos.

That’s still a lot of important stuff, though.

Macworld reports that Apple told the magazine that it was “aware of this issue, and will deliver a fix in a future software update.”

For the protection of our customers, Apple does not disclose, discuss or confirm security issues
until a full investigation has occurred and any necessary patches or releases are available.

It’s still worth having a decent password on your iPhone, to protect all the data this bug doesn’t give a miscreant access to.

To help you choose wisely, here are the Top Ten iPhone passcodes not to use: In conclusion, let the arcane nature of this trick remind you that hackers, in both the good and bad sense of the word, aren’t deterred by secrecy, obscurity or complexity.

Indeed, this trick is surely making you wonder, “How did they think of that?”

Bear that in mind if you are ever called upon to design, implement or enforce security software, policies or procedures.

8 comments on “Unlock an iPhone without the passcode – harmless trick or computer crime?”