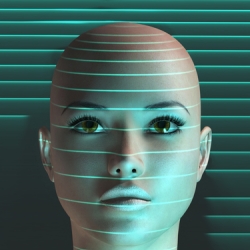 US soldiers and spies will soon be able to scan people’s eyes, faces, thumbs and voices, at a distance, using everyday, commercially available smartphones – a boon for both the battlefield and for government snooping.

The biometrics company AOptix announced on Wednesday that the Pentagon has awarded it, along with CACI International Inc, a $3 million research contract to develop AOptix’s Smart Mobile Identity devices for the US Department of Defense.

As Wired reported, the end result after two years of planned development will be a hardware peripheral and software suite that turns a regular smartphone into a device that scans and transmits data at distances not possible for current scanning technology.

AOptix’s hardware is a peripheral that wraps around a smartphone, boosting the phone’s sensing capabilities so that it can record biometric data. Unlike the device currently used to scan, upload and transmit biometric data to the US military’s wartime databases – the Handheld Interagency Identity Detection System (HIIDE) – the AOptix device can be operated single-handedly and will be as simple to use as a user-friendly smartphone application.

According to Wired, this new gadget will be able to scan faces at up to two meters away, irises from one meter, and voice from within a typical distance from a phone. Thumbprints will still require scanning against the phone’s glass face.

AOptix executive Joey Pritikin told Wired that the system will be able to capture an iris in bright sunlight, which is a challenge for current biometric devices.

It will also be able to snap photos of a face or eye as soon as the phone focuses, without the need for the user to click, swipe or press.

It’s easy to see the benefit of biometrics to troops. As early as the war in Iraq, fingerprint and iris scanners have been used to hire and maintain workforces, protect military bases and monitor inmates at detention centers.

For surveillance, biometrics has been more of a mixed bag.

As it is, the use of biometrics at borders is already threatening the security of undercover spies (and terrorists, or anybody traveling under assumed identity for any reason).

Biometrics and linked databases are making that impossible, Wired reports, quoting an ex-spook who says that simply crossing the border with a real identity and then picking up a fake one in-country to conduct covert operations is presenting risks:

"When you go to check into a hotel room for a meeting with an asset, or even rent a car to drive to the meeting - or hold the meeting in the car - many hotels and car rental agencies upload their customer data, including passport number, to immigration every day... Most countries are looking for visa overstays. But when you show up on the list as never having entered the country... it brings the police around to ask questions."

Wired notes that, particularly in “hostile” places such as Iran, where the interior ministry’s computers are assumably hard-wired into airline passenger lists and hotel guest lists, the use of false passport and travel data is a dangerous gambit.

Of course, “hostile” is a relative term. There are many who view the current state of über surveillance in the US, for example, as invasive, at best, and contemptuous of civil liberties, at worst.

It’s understandable that government intelligence groups such as the CIA or the MI6 would be concerned for the safety of their deep-undercover agents.

AOptix hasn’t identified which specific arms of US military or intelligence are gearing up to use the new biometrics scanners. But as normal Jane Doe citizens, particularly in these surveillance-happy post-9/11 days, it’s a little scary to imagine ever-easier biometric scanning in the hands of outfits such as, say, the US’s National Security Agency, which already has an insatiable hunger for data.

That’s evidenced by the Utah Data Center, the vast facility the NSA is constructing to intercept, decipher, analyze, and store pretty much everything we do and everything we say, whether our communications are dragged up from undersea cables of international, foreign and domestic networks or pinched from the sky as relayed by satellite.

Do we really want US intelligence outfits to be able to identify us via biometrics, at a distance, and squirrel our movements away in their mind-bogglingly expansive data warehouses?

We have no choice in the matter, between the creation of hummingbird drones and the upcoming handheld scanners.