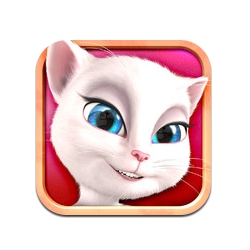 A bogus warning is spreading across Facebook, telling parents of young children to watch out for a rogue iPhone/iPad app that (the warning claims) steals children’s names, details of where they go to school, and even takes secret pictures of their faces.

The chain letter warning about the “Talking Angela” iOS app is being unwittingly spread by Facebook users, presumably with the thinking of “better safe than sorry” rather than “maybe I should just check the facts before forwarding this scare onto my friends”.

The truth is that “Talking Angela” appears to be entirely benign, and there are no obvious privacy concerns that differentiate it from thousands of other iPhone apps.

Indeed, the “Talking Angela” app is no different from other similar popular children’s apps from reputable iOS developer Out Fit 7 Ltd, including “Talking Tom Cat”, “Talking Ben the Dog” and “Talking Gina the Giraffe”. The inference from the all-caps warning is clearly that “Talking Angela” is somehow a risk to children.

However, whoever started this scare has got their facts in a muddle. For one thing, “Talking Angela” is an iOS app – not a website (although there is an optional Facebook component).

Also, the app’s purpose is to wait until the child says something and then mimic what they say back to them (albeit in a Parisian feline fashion) rather than to pilfer details of where they go to school.

None of this, of course, is to say that you shouldn’t be careful about what smartphone apps you install, and which Facebook applications you grant access to your social networking profile.

Furthermore, it’s always a good idea to keep a close eye on what children are doing on the internet – in case they get themselves into a spot of bother.

But the warning spreading across Facebook appears to be nothing more than a scare – setting the cat amongst the pigeons unnecessarily.

UPDATE: 14 February 2014 – Nearly a year since we wrote about the previous “Talking Angela” hoax, another chain letter is doing the rounds on Facebook: