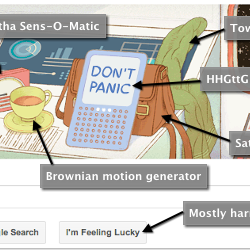 Today’s Google Doodle celebrates what would have been the 61st birthday of Douglas Adams, the British satirical author who gave the world The Hitchhiker’s Guide to the Galaxy.

What started as a BBC radio show morphed into a book, which in turn became a series of books.

In true Adamsian style, the HHGttG series, as fans call it, is resolutely referred to as a trilogy.

Adams died in 2001, at just 49 years old, of a heart attack caused by an undiagnosed problem with his coronary arteries.

The HHGttG referred to in the radio show’s title is a sort of intergalactic Wikipedia-meets-eBook travel guide for freeloading space travellers. The Guide left behind a range of catch-phrases that have entered popular speech, notably amongst techies and geeks, because they apply so well to the vagaries of IT and IT support.

The best-remembered, and most frequently heard, are probably:

* Mostly harmless, which is how the Guide summarises Earth. (Even in an electronic travellers’ Wikipedia, there are bound to be a few articles that are on the brief side.)

* Don’t panic, written on the cover of the Guide “in large, friendly letters.”

Regular Naked Security readers will have spotted irregular references to HHGttGisms in our articles, from my use of a giant DON’T PANIC logo in an article about a vulnerability that the media was blowing out of proportion, to Graham Cluley’s perfectly purposeful deployment of the term hoopy frood, intergalactic slang for “cool dude.”

As it happens, Graham’s dip into the space traveller’s argot related to another Google Doodle, back in 2010, when Google celebrated the 30th birthday of the game Pacman with a playable version on its search engine’s home page.

Googlers, of course, are HHGttG fans of the first water, with an operating system distribution called Android, and even a short-lived series of mobile devices under the brand name Galaxy. The Android in the Guide series is Marvin the Paranoid Android, a robot with a “brain the size of a planet” who is perpetually bored and depressed due to his untapped intelligence.

DON’T PANIC is an excellent guideline when it comes to computer security response, especially when malware is concerned.

Sometimes, what seems like an obvious response may be quite the worst thing to do.

That’s been true since the earliest days of malware.

Boot sector viruses, like Michelangelo (which had its 21st anniversary just a few days ago on 06 March 2013), used to be the most common sort of infection.

And received wisdom said, “Format your hard disk – it’s the quickest and easiest way to remove the virus.”

Except, of course, that a regular FORMAT removed everything except the virus, which survived intact in your PC’s Master Boot Sector, and could cannily outlive the reinstallation of DOS, the copying back of all your software, and the recovery of your data from backup.

Assuming you had a backup, that is.

Reimaging infected computers is much quicker and more reliable these days, but it’s often overkill, and (if you need to do it en masse) can still take ages and be pretty inconvenient for your users.

Your best defence, as always, is not to get infected in the first place.

But even with the best will in the world, malware can slip through. If it does, always remember those two useful words.

If in doubt, get in touch with someone you know (preferably someone you have actually met!) and trust…

PS. I’ve been clicking around on the HHGttG Doodle, but I haven’t yet found the button that, when pressed, illuminates a sign saying, “Do not press this button again.” If there is such a click sequence, and you find it, please let us know in the comments!