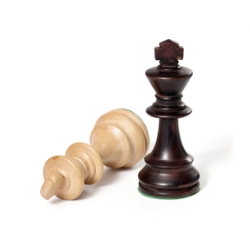 CAPTCHAs – the questions that a website asks you to answer to prove if you’re a human being or not – come in many shapes and forms.

Although they most commonly ask you to decipher some words hidden in a distorted graphic, there are more elaborate versions which can ask you to solve some complicated mathematical calculation or ask you to add toppings to a pizza in an attempt to stop automated bots leaving spammy messages.

As a keen chess player, I was interested to see this CAPTCHA being used on an online chess forum: Okay, so it’s not much of a challenge if you’re a chess player, but it also clearly locks out any users who do not know how to play chess. (For those of you can’t see the checkmate, the answer is upside-down at the bottom of this article – and make sure to realise that Black is playing from the bottom)

But most importantly, if a CAPTCHA system like this were to become widely-used, how tricky would it be for an automated bot to solve the puzzle?

Sadly, it wouldn’t be very difficult. After all, chess computers have been capable of beating world chess champions for 15 years.

Solving a chess puzzle doesn’t prove that you are a human – it just proves you know how to play chess. So it can work as a fun CAPTCHA on a chess-related website, but is unlikely to prove an adequate defence if it were adopted widely elsewhere.

Of course, some chess puzzles are harder than others – even for computers to solve.

For a bit of fun, take a look at the following chess puzzle. It’s White to move, and to mate the Black King in two moves.

Can you do it? Leave a comment below if you think you know how to solve this (sneaky) puzzle.

78 comments on “Chess CAPTCHA – a serious defence against spammers?”