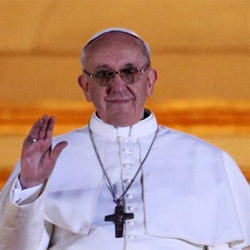 Cardinal Jorge Bergoglio was only named as the new Pope in Rome’s St Peter’s Square a few hours ago, and already he’s making an impact on social media.

Hundreds of thousands of Twitter users, for instance, have started to follow @JMBergoglio, which purports to be the Twitter account of the Argentinian cardinal who has just landed the top job in the Roman Catholic church.

Indeed, every time I refresh my browser I see hundreds more people are choosing to follow the account. But does the Twitter account really belong to the man who will be known as Pope Francis? As eagle-eyed journalists at The Slate report, if this really is a Twitter account belonging to the new Pope he has been posting some rather strange tweets in the past. “If I’m going to be the new pope, kids are going to love me more than Santa Claus”

There is a serious security-related side to this of course. No doubt some of the people following this account might believe that it really does belong to the new Pope. And if whoever runs the account had bad intentions they could easily attempt to spread spam or post malicious links to their huge, and newly-won, following.

And, as we all know, cybercriminals love to take advantage of a hot news story to spread attacks and dupe people into clicking on links without thinking.

Or, if you’re interested in keeping up-to-date on security news, feel free to follow me at @gcluley. (Actually, if you like, feel free to follow both me and the Pope – it’s unlikely we’ll be covering the same subject matter very often. And – unlike him – my Latin is terrible)