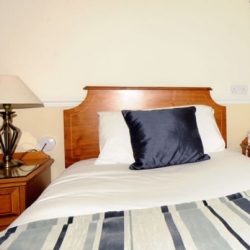 A seaside hotel in Pembrokeshire, South West Wales, has become the unwilling participant in a widespread malware attack spammed around the world.

Computer users have received emails claiming to be a booking confirmation from the Atlantic Hotel in Tenby.

But the truth of the matter is that the emails don’t come from the hotel at all, but are instead designed to trick curious recipients into opening the dangerous file attached.

Here is what a typical email sent out in the malware campaign looks like: Further to our telephone conversation, please find attached confirmation of your booking with us.

We would like to thank you for making this reservation and we look forward to greeting you at the Atlantic Hotel on the 20th March 2013.

Attached to the email is a file called “AtlanticHotel Booking Confirmation.zip”, which contains a malicious Trojan horse.

Sophos products detect the attack as the Troj/Agent-AAQY Trojan horse, designed to hijack your Windows computer and give remote access to malicious hackers.

The Atlantic Hotel is clearly unimpressed with the malware campaign bringing its name into disrepute, and has put a note on the front page of its website: Please Note
The Atlantic Hotel domain is currently being used to 'spoof' emails containing a 'trojan' attachment ending in the words booking confirmation.zip. We are aware of this and are trying to combat the situation, please delete any email with an attachment purporting to be from us. These emails originate somewhere other than on our server and so we have no control over them.

As always, the best defence is to keep your anti-virus defences updated and always think twice before opening unsolicited email attachments.

PS. For those thinking of nipping off to Tenby for a quick holiday here’s a weather report. It’s currently cloudy, with the prospect of rain showers later.