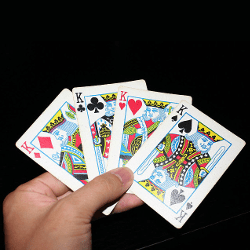 A high-rolling gambler has allegedly won $32 million at a casino in Melbourne, Australia, thanks to a little network hackery carried out by accomplices.

Games like poker are much easier to win if you know some or all of your opponents’ cards.

After all, it’s hard to sustain a bluff if the person you’re bluffing has actually seen your hand.

In this case, the un-named “whale” – casino argot for a player who wagers large amounts of money, often on giant-sized individual bets – is said to have relied on his accomplices to feed him information about what other players at his table were holding.

His accomplices were able to snoop on the other players because they had remote access to the casino’s own surveillance system, giving them a bird’s eye view from CCTV cameras right inside the high-rollers’ room.

The $32 million was apparently scooped in the course of eight big-stakes hands. To increase their chance of catching cheaters (and thereby, no doubt, to discourage gamblers from trying to cheat in the first place), casinos typically have substantial networks of cameras giving high-quality, real-time video feeds.

So, this is an excellent reminder that the modern trend towards “big data” – where you hoover up as much information as possible, in as much detail as you can manage, about as many of your customers as you can – cuts both ways.

“Big data” can not only help to uncover patterns that expose fraud and criminality, but also end up enabling it.

(Why would you need a miniature camera cunningly mounted on an ATM to skim PINs from unsuspecting users, if you could just hack into a shopping mall’s CCTV system and let someone else’s camera do the work?)

By the way, do you have video surveillance in your workplace?

If so, how well do you protect your own CCTV network, which may very well include proprietary software and equipment, from prying eyes?

It’s not just your employees’ privacy that’s at stake, but possibly also (as the Melbourne casino found out) the financial health of your business…