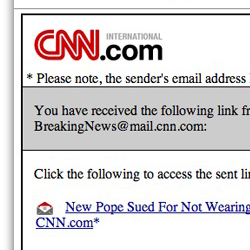 Don’t believe everything you read – because if you do, cybercriminals are going to take advantage of your gullibility and infect your computer with a Trojan horse.

Malware campaigns spammed out in the last 24 hours have pretended to be breaking news stories from the likes of CNN and the BBC.

Here are some examples, claiming to be a breaking news alert from CNN, which have focused on arresting news stories around the new Pope.

Some of the messages are quite farcical: While others are clearly much more serious: Either way, you can probably understand why some computer users might be tempted to click on the links without thinking.

Meanwhile, more recent version of the malware attack have been spammed out pretending to be from the BBC:

Clicking on the links of any of these emails, ultimately takes unsuspecting internet users to webpages containing obfuscated code that attempt to infect computers using the Blackhole exploit kit. Of course, this is far from the first time that we have seen cybercriminals pretending to be the likes of CNN or the BBC in an attempt to get recipients to open an email and click on a link.

Notorious examples include the fake CNN emails that claimed to contain a link to the Erin Andrews Peephole video or news that Mitt Romney had almost won the White House.

As always, keep your wits about you, and your security patches and anti-virus software up-to-date.

Thanks to Brett Cove, Peter Szabo, Savio Lau and Fraser Howard of SophosLabs for their assistance with this article.

One comment on “Pope sued over sexual abuse and not wearing seatbelt? Fake CNN and BBC news alerts spread malware”