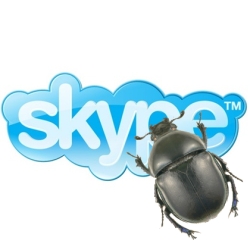 SophosLabs has intercepted a malware attack, hitting many German internet users today, disguised as an email from Skype.

The email, which has the subject line “Wir haben Ihre Bestellung geliefert” (Translation: We have delivered your order”) has a ZIP file attached, which contains a Trojan horse.

The email claims that details of the order can be found in the attached file.

Here’s what a typical example of the email looks like: Inside the ZIP file, however, is a program called Die Einzelheiten Ihres Eiknkaufs.pdf.exe, obviously designed to use the “double-extension trick” to hoodwink unsuspecting users into believing it is a PDF rather than an executable file.

Sophos products are being updated to detect the malware, which has been identified as the Troj/Agent-ABCT Trojan horse.

Of course, the emails do not really come from Skype – and you can’t feel anything but sympathy for the company which is having its brand tarnished in this way by cybercriminals.

All internet users must remember to always be suspicious of unsolicited emails, and to be wary of clicking on unknown attachments.