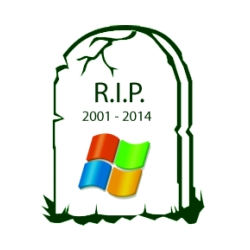 On April 8th, 2014 – exactly one year from today – Microsoft will terminate Extended Support for Windows XP.

That means no more security updates.

And that could mean very big problems for a significant percentage of PC users.

According to data from Net Applications, Windows XP still maintains a nearly 39% hold on the desktop operating system market, second only to Windows 7 which has just under 45%.

Imagine, if you will, what could happen should bad guys decide to hold onto exploits, plotting to use them only after Microsoft stops releasing patches for Windows XP.

There’s certainly the potential for a lot of havoc, for instance new internet-propagating worms that target Windows XP systems, or even just an increase in Internet Explorer 8 browser exploits that could open the doors wide for all manner of malware infections.

(Lest anyone think we’re giving the bad guys ideas, we’re certainly not the first to suggest that such things may be on the horizon. And frankly, these statements are rather obvious, and exploit developers aren’t stupid.)

Will Microsoft extend support for Windows XP security updates? Perhaps, but it seems rather unlikely given that Microsoft has already extended the support deadline more than once. Windows XP is now three generations old, having been succeeded by Vista, Windows 7, and now Windows 8.

Moreover, Windows XP was originally released in October 2001. That means that by this time next year, XP will be 12.5 years old.

Rarely does any operating system continue to receive security patches for so many years. Numerous security improvements have been introduced in every subsequent version of Windows.

If you’re concerned about security and you’re still using Windows XP, it’s time to move on.

Of course, it’s easy to say that, but not every individual or company can afford to upgrade or replace their computers regularly. If you don’t think you can afford it, skip the Starbucks for a few months and set aside that money for a Windows upgrade.

Volume licensing for businesses can reduce the cost of Windows 8 Pro somewhat.

Even so, depending on the number of PCs a business wants to upgrade, plus the cost of RAM upgrades as may be needed for older systems, many companies will have to spend multiple thousands of dollars just to upgrade their Windows PCs from XP to 8, not to mention the time and other factors involved in undergoing a major organization-wide upgrade.

The alternative option of replacing all XP systems with brand new PCs would cost thousands of dollars more.

Regardless of the reasons you’re still using Windows XP, if you haven’t yet made plans to ditch it, you’ll want to start making those plans now.

Windows XP isn’t the only Microsoft product whose support ends a year from today.

But just to be safe, it’s probably wise for everyone to upgrade as many PCs as possible before April 8th arrives next year.

And while you’re at it, make sure your friends, relatives, and local businesses know about the XP support deadline, too.