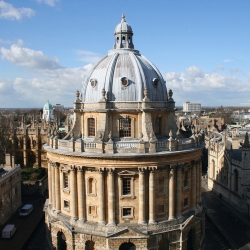 A 21-year-old British man has pleaded guilty to charges that he attempted to bring down a number of websites, including those belonging to Oxford and Cambridge universities, as well as the site belonging to the Kent Police force who ultimately arrested him.

Investigators discovered that Martin had used the online alias “Sl1ink” when he anonymously contacted the media, claiming to have shut down the Kent Police website.

According to a police statement, the university and police websites were only temporarily disrupted and were not compromised during the attack.

Nevertheless, prosecutor Ken Goss said that both universities estimated that they spent approximately two weeks’ worth of man hours, dealing with the attacks.

At Maidstone Crown Court, Martin pleaded guilty to a total of nine charges:

Martin is scheduled to be sentenced in May.

Hopefully, if you are a regular reader of Naked Security, you will know by now that denial-of-service attacks are against the law in many countries around the world, and realise that the consequences of participating in such attacks can result in a prison sentence.

Just because something is easy to do via the internet, doesn’t mean it should be done.