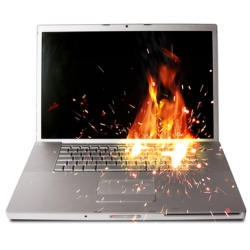 It’s easy to become cynical about human nature if you’re fighting online criminals day-in-day-out, but the comforting truth is that that the vast majority of people are actually decent and well-meaning, and keen to help others if they think they can.

And it’s the desire to help others that all too often unwittingly perpetuates hoaxes and chain letters and helps them to spread.

Take, for the instance, the following photograph that has been shared widely on Facebook, claiming to be a “Red Alert” warning for computer users.

(Although it looks like a lump of text, it’s actually being shared in the form of a Facebook photo – which certainly makes it more dramatic, as the font is so large) Of course, the warning is complete and utter balderdash.

There is no such virus, your hard disk is not going to be burnt, CNN has said no such thing, Microsoft has not classified any malware as “the most destructive virus that ever existed”, and as for the claims of hardware destruction… come on!

Too anyone with a more than basic computer knowledge, it’s clear that there’s something not quite right about the warning when you come to read it – and yet, at the time I took the screenshot, some 35,000 people had shared it with their Facebook friends and family members, presumably believing it to be true.

My guess is that many of those people didn’t even bother to read the warning. Many of them just quickly shared it on to their friends without critically evaluating the information they had received.

Please circulate this notice to your friends, family and contacts!

In the coming days, warning: do not open any message containing an attachment called Archive (Windows live) regardless of who sends you. This is a virus that burns the entire hard disk. This virus comes from a known person you have in your mailing list, which is why you should send this message to all your contacts. If you receive a message called "UPDATING WINDOWS LIVE", even if is sent by a friend, do not open it and stop immediately. This is the worst virus announced by CNN. It has been classified by Microsoft as the most destructive virus that ever existed. The virus was discovered yesterday afternoon by McAfee, and there is no chance of repair for this type of virus. Simply destroys Sector Zero of the hard disk. Just copy and paste..

Wouldn’t a real warning have included links to a reputable security website, giving more details on the so-called virus? Shouldn’t there be links to a CNN news report, or an advisory from McAfee where they announce that they have given up attempting to build a repair for the malware?

In fact, a little searching on the net would have revealed to any of those 35,000 people that there have been plenty of “virus warnings” in the past, which have looked remarkably similar, and have been exposed as hoax chain letters.

It’s a serious problem. As well as adding to the general glut of spam and unnecessary messages floating across the net and clogging up corporate networks, hoaxes have also been responsible for panicking computer users into making very poor decisions.

Image of Laptop on fire courtesy of Shutterstock.

6 comments on “Seriously folks, you should know that Facebook warning about a virus *burning* your hard disk is bunk”