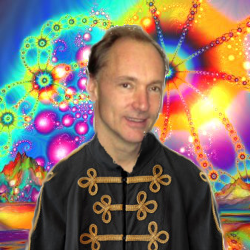 [With apologies to Lennon, McCartney, Harrison, Starr. And, of course, to Sir Timothy.]

It was twenty years ago today that the World Wide Web came out to play, with CERN Geneva officially putting the Web, and the early client and server side software that made it work, into the public domain.

Naked Security colleague Graham Cluley emailed me remind me that CERN had celebrated by putting an early version of the first website back online at its original URL.

But Graham couldn’t get much further.

“If you follow the link and try to access the actual original first webpage,” he wrote, “It’s inaccessible, presumably because everyone is trying :)”

So I thought I’d look into things when the dust had settled a little.

And since everyone else seems to be writing intellectually meaningful pieces about what this great anniversary reminds us about the evolution of our post-modern, always-on, interconnected, map-reduced, object-oriented, long-tailed, hypermedial global village, I thought I’d just show you a sequence of pictures.

CERN’s document that officially put the World Wide Web into the public domain on 30 April 1993: The republished version of the very early CERN website is at the original URL of info.cern.ch/hypertext/WWW/TheProject.html, but whether due to high traffic or simply due to its old-school content, Firefox wasn’t terribly happy: Rather delightfully, the Lynx text-mode browser had no such trouble: Indeed, who needs a browser when you can use vi, the ultimate line-mode HTML viewer: And the only sad part of the whole tribute was that it wasn’t the original web server (unless CERN really does have a time machine, and projected HTTP/1.1, Apache and the existence of HTTP headers back in time): Are you disappointed that it’s not quite the real thing?

It’s fun to reminisce, and, anyway, why would anyone look back on the old days of the internet except with delight?

Think how much easier things were.

No DOM, no jQuery (no JavaScript to run it!), no IFRAMEs, no Flash plugins, no Java applets.

Oh, and no Internet Explorer.

No Firefox, for that matter, and no Opera, no Chrome (no Google to write it!), no Facebook, no Twitter, no eBay, no Amazon and certainly, definitely, absolutely no lolcats.

And special thanks to CERN, for wading through its own bureaucracy to launch The Web without any.