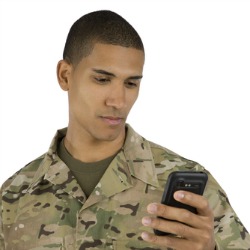 The US Department of Defense (DoD) announced on Thursday that it has approved the use of Samsung phones running a hardened version of Android.

According to the BBC, the approval for other types of smartphones and mobile devices for use by US soldiers is coming soon.

Specifically, approval for other Android devices and for Apple phones and tablets is expected later this month.

According to Federal News Radio, the move is part of a broader DoD plan to more than double the number of secure mobile devices used by armed forces by 2014.

The approved Samsung smartphones will run a hardened version of Android called Knox.

The Pentagon has also given a nod to several recent BlackBerry products, which Federal News Radio refers to as “the overwhelming incumbent in the market for DoD handhelds”.

According to the BBC, the DoD also plans to build a secure system to manage the new mobile devices and their associated app stores and is now assessing associated commercial bids.

Each smartphone will have to undergo vetting to ensure that neither the smartphone nor its operating system has security vulnerabilities, according to The Hill.

The timing on the approval of smartphone use supports a move to a new, “on-the-move” satellite-based network about which the US Army issued a statement in March.

The network is designed to keep troops connected over “vast” distances, allowing information to flow throughout the brigade down to on-the-ground soldiers as they assist in the drawdown of US forces. This type of constant communication is “much needed” in Afghanistan, said Brig. Gen. Walter E. Piatt:

According to The Hill, the devices going along to help soldiers with this dangerous work have been hardened to military specifications and run off of secure DoD networks.

That’s a relief, given how pathetically the devices performed when initially tested in November 2011.

Back then, active duty soldiers tried out two mobile apps: a tracking system designed to locate friendly battlefield forces and a digital interpreter to help troops communicate with Iraqis and Afghans.

These are the problems that cropped up:

But while those problems have apparently been overcome, there are still kinks to be worked out.

For example, reports say that the DoD hasn’t yet figured out how to handle two-factor authentication with the new mobile devices, though officials would love to drop what Federal News Radio refers to as the “clumsy” add-on smart card readers that are now capturing credentials from users’ common access cards.

Image of soldiers courtesy of Army.mil.