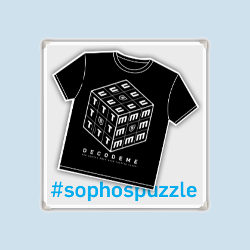 And for everyone who’s asked, the answer is, “Yes! There’s a #sophospuzzle.”

And a Sophos AusSHIRT to go with it.

Over the past few years, the Sophos AusSHIRT Puzzle has become a something of an institution.

It’s also one of the coolest and most sought-after giveaways of the show.

(What am I saying? It’s the most sought-after giveway!)

For those who won’t be on Queensland’s Gold Coast later this week, we’ll also be publishing the puzzle for you to solve and enter online.

There are prizes, as usual: geeky toys at the show, and a bunch of T-shirts for those who solve it online.

In previous years, the puzzles typically had multiple stages, with the shirt decoding to a URL, and the URL taking you to the next level, and so on.

Many of you asked us to make the 2013 puzzle a little more self-contained, notably so that those who are attending the conference don’t need to spend hours on their computers working their way through it.

Instead of three stages, this year we’ve given the puzzle three dimensions (OK, technically it’s an isometric projection into two dimensions, but bear with us here), and just one stage.

So you can solve this puzzle straight from the shirt, using nothing but pencil, paper and intellect. We’ll fill in the real letters in the squares of the Rubik’s Cube when the puzzle proper starts. (No, the answer isn’t “UTM”. Well, not this answer, anyway.)

That’s 6pm Queensland time, 4pm Singapore time, 10am in Berlin, 9am in the UK, 4am in New York and 1am in California.

It’ll also be half past five in the morning in Newfoundland, and quarter to two in the afternoon in Kathmandu, for those of you who doubt the need to take fractional timezones into account when programming.

Just so you know, the puzzle is a cryptogram, which means that the letters on the cube have been scrambled using an encryption algorithm.

It’s a slightly wacky and unusual cipher, with both substitution and transposition, but the substitution always replaces each plaintext letter with the same encrypted letter.

So you shouldn’t need a computer to solve it.

Sophos Australia will feed you hints on the @Sophos_ANZ Twitter feed, so follow the SophOz team for some extra help.

And I’ll be keeping a watchful eye on proceedings via @duckblog.

Hope you can join us online, even if you won’t be there to pick up a shirt!