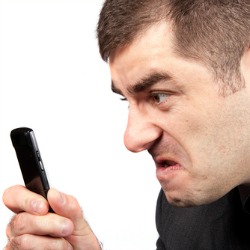 Google has filed a patent for a new technique to unlock your computing devices.

The patent describes a way to match up “facial landmarks” between two facial images, as well as performing a “predetermined facial gesture” to get there.

Fancy talk aside, we’re talking about grinning or sticking out your tongue at your phone.

Specifically, the patent covers making faces at your phone with any of these gestures:

The patent covers technology to match at least one facial landmark between pre-funny-face and during-funny-face images: at least one of an eye, an eyebrow, a mouth area, a forehead area, and a nose.

It’s the latest of a running series of Google’s attempts to remedy the easily hacked Face Unlock feature introduced in the Ice Cream Sandwich version of Android.

That technology was initially hacked by holding up a photo to the phone.

Google responded by introduced a technique called “Liveness Check” that requires users to blink to prove they’re alive and not just a photo.

The new funny-face technology should be harder to crack, since it could ask for any of a number of gestures, forcing an intruder to do quite a lot of grimacing or photo-editing in order to illicitly use another’s Android phone. The patent also introduces an anti-spoofing system that would beam light towards the subject and then pick up on the light beam when it’s reflected back off the subject’s cornea. By tweaking the light color, this system would theoretically prevent somebody from holding up a photo and getting in that way.

Regardless of the patent, facial recognition software isn’t quite ripe enough to reliably secure a computing device just yet, according to a consultant interviewed by The Register.

A quote from Prof Alan Woodward, chief technology officer at the consultancy Charteris:

"The problem with biometrics in the past has been that you have always been able to find a way to work round the requests to deliver what's needed. ...It sounds like Google is thinking about how [to] try and counter this with randomness and movement.

"But there's a long way between writing a patent about an idea and delivering it as a reliable security measure. I would expect people will still use traditional passwords for some time to come."

And just how might this new facial recognition technology play with Google Glass, the center of much all-things-facial speculation lately?

A Google spokesperson told The Register that some ideas never see the light of product-development day, and that “Prospective product announcements should not necessarily be inferred from our patent applications.”

Glass aside, if Google does make a product out of the new technology, get ready to behold Android users emoting all over their phones in public.

We already have a new term for Glass wearers: “glassholes”.

We’ll have to come up with a new term for these grimacing phone users.

Image of man grimacing at phone courtesy of Shutterstock.