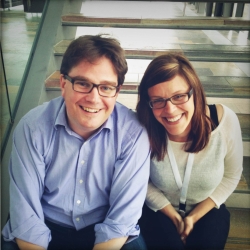 The end of an era has come. After a combined service of – gulp – 29 years, we are saying au revoir…

It’s time for me to clear my desk, shake the crumbs out of my keyboard, pack up my remote control Dalek, and go home. I’ve been working at Sophos since 1999, and writing articles for Naked Security since.. well, since before it was called “Naked Security”.

(Little known fact: for a while we considered calling the site “Security Hound”, with a subhead of “P*ssing on the lamp post of security”.. probably a good thing we didn’t run with that in the end)

But, in the words of George Harrison, all things must pass.

After writing over 2500 articles for Naked Security, I fancy doing something different – and hope to fill my time writing on grahamcluley.com (yes, that’s a vanity domain name) about the latest security threats, public speaking and generally enjoying being my own boss.

You’ll still be able to find me on Twitter, on Facebook (which I still loathe by the way), on Google Plus and – of course – on email.

I’m happy to leave Naked Security in the hands of a fine team of writers and experts, and am sure that Duck, Lisa, Anna, Chet, John and others will continue to keep you informed and entertained.

One person I won’t be saying goodbye to is Carole, who founded the site (and besides managing me in recent years, was also the best man at my wedding 🙂 ). She’s also leaving Sophos, and will be running her own social media blog and agency.

Thanks for reading, and see you online.

How do you sum up 15 years of Sophos?

When you work somewhere for sssoooooooooooo long, the lines between personal and business not only blur, they utterly disappear. Gizmos like Blackberries and RSA tags helped me bring work home, and being surrounded by lots of lovely brainy sorts made the office feel homey.

I even met my hunksband John Hawes here.

I started as a technical author back in ’98 when most company webpages were still designed like posters. I leave now with the lah-di-dah title of global comms director.

Sophos has afforded me the chance to be involved in so many projects. Here are a few of the greats:

We wanted a guerrilla campaign, and we came up with a doozy – to deliberately leak out a Klingon translation of Sophos Anti-Virus. First, a Klingon translator was needed: enter naHQun. We then pulled together a beta webpage, littered with ‘Lorem Ipsum’ text and <!--comments--> to make it look like it had accidentally launched early. The result: a ton of press coverage, gluts of love from the sci-fi community, and a few lovely product reviews, which led to 100,000 downloads in three months. We celebrated with this video:

Launching Sophos’s first, free, fully functional home user product was not easy. At the time, Apple said its OS was virus free, but we knew malware targeting Macs was just around the corner. It was a bit of a slog, but we got it out the door. We so hoped to reach 100,000 users…but Sophos’s free home edition for Mac boasts 2.4 million downloads.

My favourite project of all. Once we got the go-ahead (thanks Rainer), we came up with an untested approach to corporate comms. We sorted the logistics, content and design and then agonised about names. The eureka moment came to Graham while we were both getting body scanned at Boston Logan Airport. Today, we publish more than 100 articles every month, and 800,000 of you readers give us 1.4M page views. So proud.

I blow kisses to all of you that downloaded the aforementioned software, watched the videos or read our blogs over the years. And there will be much more to come – I am handing the Naked Security reins to the sassy Anna Brading.

With a heart as heavy as a lead piano and memories as vivid as a 1970s disco outfit, I am dipping my toe into new waters, like ticktocksocial.com, a new communications blog I am playing around with. Of course I am on the usual channels: Twitter, Linkedin, Facebook, Google+ and email.

I’d never done any of this without Sophos’s two founders, Dr Jan Hruska and Dr Peter Lammer, who welcomed me into the fold after a series of seriously grueling interviews. They deserve the most thanks of all.

And finally to the leading man, CEO Kris Hagerman, who knows what a diamond of a company Sophos is, do your thing and make it sparkle.