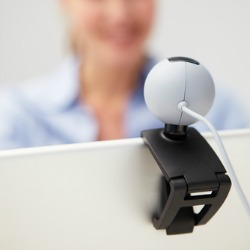 Do only the truly paranoid stick bandages over their webcams so they don’t get surreptitiously recorded?

According to a BBC Radio 5 live investigation, the rationale for doing so might be strong enough to vindicate the paranoid, given input from webcam hackers who say that such hacking is simple and that black markets for selling access to compromised computers are “thriving.”

One webcam hacker who spoke to the BBC said “loads of people” are hacking webcams because it’s so simple to do.

In fact, while he was being interviewed, he was on a forum with tutorials on how to hack webcams. It had about 428,000 posts, he said.

Hackers gain access to their victims’ computers with remote-access Trojans (RATs) – malware that gives an intruder administrative control over its targeted computers, including, in this case, the ability to remotely control webcams.

It’s an invisibly-installed malware program spread via email attachment or by tricking victims into visiting a booby-trapped site.

The BBC interviewed one victim who thinks she was victimized by webcam hacking.

Rachel Hyndman said that she noticed that her laptop camera had switched itself on while she was watching a DVD in the bath.

She was, of course, horrified:

"I was sitting in the bath, trying to relax, and suddenly someone potentially has access to me in this incredibly private moment and it's horrifying.

"To have it happen to you without your consent is horribly violating."

For the investigation, a BBC producer posed online as a computer security enthusiast in order to contact several webcam hackers from around the world – at least one of whom has since been arrested.

The investigation uncovered websites where hackers share pictures and videos of their victims aka “slaves”, pages where they swap photos of “ugly slaves”, sites where men swap images of female “slaves”, and evidence of at least one black market where you can buy access to a woman’s webcam for $1 (64p).

The same amount will get you access to 100 computers owned by men.

How common is this type of hack?

Graham Cluley told the BBC that webcam hacking is quite real.

That’s evidenced by multiple arrests of perpetrators – including those looking to blackmail victims.

But while it is real, GC says, webcam hacking is rare enough that it’s not quite worth freaking out over in the broader scheme of virusy things:

"There are 100,000 new virus threats created every day and it's really important to keep your security up to date because anti-virus software should protect you against most of these threats."

Still, you don’t want to be one of the (albeit rare) victims.

A list of tips on avoiding getting webcam-hacked, some of which are adapted from a list provided by ChildNet International and the UK’s Child Exploitation and Online Protection Centre:

Stay safe, and keep an eye on that webcam light.

Image of webcam and computer spying courtesy of Shutterstock.