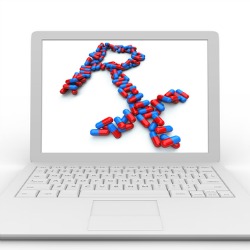 The US Food and Drug Administration (FDA) shuttered 1,677 illegal pharmacy websites during a one-week crackdown in June, the agency announced on Thursday.

The FDA says the sites were selling counterfeit or substandard medication or didn’t have appropriate safeguards in place to sell the drugs.

Many of the sites were slick, with fake licenses and certifications to convince US buyers that they were Canadian pharmacies and were selling “brand name” and “FDA approved” drugs.

The sites, many of which the FDA says were apparently run by an organized crime network, tweaked major US pharmacy names to further the con, such as “walgreens-store.com” and “c-v-s-pharmacy.com” (The FDA’s Office of Criminal Investigations Cybercrime Investigations Unit banner is now displayed on seized websites to help consumers identify them as illegal).

This is the sixth annual crackdown of its kind and the most expansive to date.

The crackdown revealed that antidepressants, hormone replacement therapies, sleep aids, and other drugs to treat erectile dysfunction, high cholesterol, and seizures are being shipped to US consumers from abroad.

FDA Commissioner Margaret Hamburg told CNN’s Dr. Sanjay Gupta that the agency found phony drugs being sold and shipped that actually had 0% of the active ingredient people thought they were buying:

The most common scams advertised drugs popular with consumers, such as:

It’s easy to see why US consumers in particular would be drawn to purchasing what look like low-cost drugs, particularly if they’re purportedly from Canada, whose health system enables its citizens to pay reduced prices.

But as Sophos’ Chester Wisniewski has noted, Canadian law keeps the country’s drug supply safe, similar to how the FDA functions in the US.

That legal protection doesn’t apply to drugs sold by Canadian pharmacies outside of Canada, though, allowing for largely unregulated pills to be sold to foreigners with little oversight.

So even if these pharmacies had been Canadian, they still wouldn’t necessarily be safe bets.

And as the FDA warned, beyond the danger of getting bad drugs are a slew of financial risks: credit card fraud, identity theft, or malware downloaded at these creepy sites.

US compatriots, we suffer from astronomically high costs for prescription drugs.

The promise of low-cost drugs is enticing, particularly to those of us who might be prone to come-ons and desperate for financial relief from those costs, such as the elderly or those of us who lack health insurance.

Keep an eye out for any vulnerable friends or family who might be easy marks for these snake oil sales pitches.

Images of Rx online and mouse and Rx courtesy of Shutterstock.