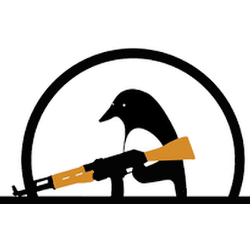 Mark Shuttleworth is famous for two things: for being the first African in space, and for founding Canonical, the company behind Ubuntu Linux.

→ I know it’t not really Ubuntu Linux. It’s Ubuntu, a computing platform based on GNU/Linux and including lots more besides. But we shall call it “Ubuntu Linux” as a sort of handy abbreviation.

Ubuntu was arguably the first Linux distro to attract the attention of ungeeks, to provide an installer that tended to “just work” without any jargon, and to gain a foothold of any sort amongst the type of user that would otherwise perfectly happily have paid for Windows or OS X.

As a result, it spawned a range of online forums dedicated to supporting and nurturing its large fan base, handily collated into the Ubuntu Forums portal.

Ubuntu Forums is bankrolled by Canonical, and should look something like this: (That’s supposed to be Tux, the penguin mascot of Linux, waving an AK-like assault weapon in his flippers.)

By now, the day after the attack, there’s just a breach alert holding page put up by Canonical: It’s hard to imagine what the hackers hoped to achieve by taking out a bunch of free forums for a free distro of a free operating system.

Some commenters in the Twittersphere can’t find rhyme or reason either, and have let rip with opprobrious tweets to make their displeasure known:

Of course, one perfectly likely explanation for the hack is clear from Canonical’s mea culpa letter: for the personally identifiable information (PII) that it yielded.

Unfortunately the attackers have gotten every user's local username, password, and email address from the Ubuntu Forums database.

With close to 2 million signed-up members, that could mean a lot more spam for a lot of people.

And for those who have chosen poor passwords, the stolen password database could mean worse than that.

The passwords are not stored in plain text, they are stored as salted hashes.

It might have been handy if Canonical had said what sort of salting-and-hashing was used, to give some idea of how quickly an attacker could try a dictionary of passwords against the stolen data.

On the other hand, if you change your password as soon as the Forums come back on line (and it’s likely Canonical will force everybody to do so anyway, for safety’s sake), and you haven’t used the same password anywhere else, you ought to be OK.