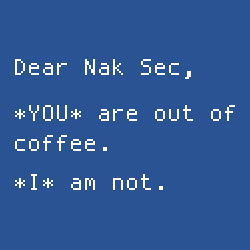 Not everyone is pleased that we’ve been asked to recognise the efforts of our IT staffers today. No sooner had we launched our Worst things to ask a sysdmin poll than we received an anonymous email from a disgruntled sysadmin called Simon Oliver Meone. He questioned the sincerity of, well, the whole world, really. Having binned his mail to start with, we suddenly thought you might benefit from his jaundice. So we extracted his email from the virtual wastebasket, smoothed it flat and published it here.

A techie tells us what he thinks…in a typewriter font, of course

Just saw your smug little piece about being nice to sysadmins today.

Did I read that correctly? I’ll tell you what I think of that! Read my lips…on second thoughts, you never bothered to learn how to do that, did you? Did you never stop to wonder how it is I seem to know what you want before you reach my desk? Apart from reading your email and your instant messages, of course, which is actually the easiest way to do that trick, if I’m honest.

Because *I* learned to lip read, that’s why, so I know what you’re saying from a distance. You’re probably wondering why I bothered, but then most things to do with technology probably make you wonder, so that was hardly worth saying.

The reason should be obvious – it’s so I don’t need audio while I’m watching all those old episodes of Star Trek that I stashed in the hidden P2P directory on your laptop. That means I am able to be attentive and get in a good couple of pertinent and toadying observations during those interminable monthly corporate conference calls, because I can *listen* to the call while *watching* Kirk and Spock do exciting intergalactic stuff.

You, on the other hand, have to *watch* the conference call while *listening* to Nigella Lawson do something culinary with a root vegetable that appears to fill you with wonder, so you never get to show appreciation to your office overlords at just the right time.

And why is that you lot are so star-struck by those celebrity chefs?

There’s one of them that goes around pouring liquid nitrogen on things to make these amazing desserts, and you’re like, “Wow! Check that chemical reaction!’ Firstly, nitrogen is inert. Cooking with liquid nitrogen isn’t CHEMISTRY, it’s PHYSICS. Secondly, who do you think invented the use of cryogenics in the kitchen? OK, in our case, in the server room.

How do you think sysadmins make ice cream? We *pioneered* the use of industrial-grade processes to prepare individual meal portions!

Actually, I have to say that I met a Navy noncom once who was way, way ahead of our tribe in the sledgehammer-to-crack-nuts school of gastronomy. Did you know that if you lash one of those single-cup stove-top espresso makers to the breech of a 5″/54 Mark 45, the exothermic violence when the weapon fires gives you a perfect shot with every shot?

Anyway, you’ve got this poll going on where you are trying to teach people not to say things that you think sysadmins don’t like to hear, such as “You don’t look very busy” and “We’re out of coffee.”

And that is why I am writing to you to complain.

I spent years – at school, at home, at college, in my first job, in my second job, in between home-made ice creams (try pouring chocolate milk into liguid N2 and tell me it’s not superb), in my (m..n)th jobs for 2 < m <= n – learning how to program.

I can program in Bash, Python, C, D, Haskell, ocaml, Lua, Befunge, Erlang – any language at all except Java, in fact, which I refuse to learn on doctrinal grounds – so I don’t NEED to be busy.

I’ve BEEN busy, writing code to do everything for me.

I’ve even written some Perl modules that watch those Star Trek episodes for me while I’m listening to conference calls, using advanced image processing to detect when the USS Enterprise reaches a new planet. Then it sends me an IM, so I can stop working on the other code I’m writing and watch only the good bits.

(The new code will respond automatically to the IMs about the new planets, and start watching for me to make sure it’s not a new planet I already know about, and then I won’t need to be distracted as much by Star Trek, leaving me free to catch up on Dr Who while I’m watching Star Trek while I’m on the conference calls.)

And the other thing I want to complain about is that bit about not saying, “We’re out of coffee.”

The question you really need to ask is, “Why are *we* out of coffee, while *you* are not?”

PS. Sysadmins do love their users really. Especially users bearing pizza. Even if it’s made using conventional convection cooking techniques. So please enter, and get your colleagues to enter, the Sophos Win-A-Pizza-Party competition, and make some sysadmin’s day! Click here to enter. (Only residents of the UK or the USA are eligible to win. Sorry about that.)