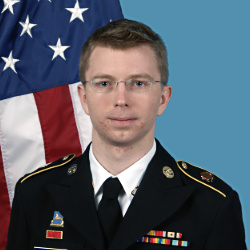 Bradley Manning is not guilty of aiding the enemy but has been convicted on 19 other charges including multiple counts of espionage. The former US army intelligence analyst has been facing a court martial at Fort Meade Maryland for numerous charges relating to the biggest leak of restricted government files in history.

The material was released by Manning through the website Wikileaks between April and October 2010 and includes 250,000 diplomatic cables and 500,000 classified army reports from the wars in Iraq and Afghanistan.

The material also included the infamous Collateral Murder video that shows a US strike on Baghdad by attack helicopters in which two Reuters war correspondents were killed.

Judge Colonel Denise Lind ruled that Manning was guilty on multiple charges of espionage, theft, computer fraud, violating a lawful general regulation and one charge of wanton publication of intelligence on the internet.

However she found him not guilty of the most significant charge of all, that of aiding the enemy.

Reuters reports that the U.S. government was seeking to convict Manning of aiding the enemy to secure an automatic life sentence without parole.

The Legal Information Institute describes a person guilty of aiding the enemy as one who:

(1) aids, or attempts to aid, the enemy with arms, ammunition, supplies, money, or other things; or
(2) without proper authority, knowingly harbors or protects or gives intelligence to, or communicates or corresponds with or holds any intercourse with the enemy, either directly or indirectly;

During the trial the prosecution characterised Manning as a ‘traitor’ with ‘general evil intent’ and as ‘a determined soldier with a knowledge, ability, and desire to harm the United States in its war effort’.

The defence presented Manning as a whistleblower, deeply disturbed by the ‘bloodlust’ he had seen during his time in Iraq.

Following news of the acquittal Bradley Manning’s family released a statement that reads:

While we are obviously disappointed in today’s verdicts, we are happy that Judge Lind agreed with us that Brad never intended to help America’s enemies in any way. Brad loves his country and was proud to wear its uniform.

Amnesty International reacted to the news by describing the US government’s pursuit of the charge of aiding the enemy as:

...a serious overreach of the law ... there was no credible evidence of Manning's intent to harm the USA.

The Democratic and Republican leaders of the US House of Representatives intelligence committee chose to emphasise the successful convictions in their own joint statement.

Although he has quashed the most serious accusation against him, the young US army private could still be facing a lifetime behind bars.

We won the battle, now we need to go win the war ... Today is a good day, but Bradley is by no means out of the fire

The month-long sentencing phase of the court martial begins today.

33 comments on “Bradley Manning: guilty of espionage but not aiding the enemy. But was justice served? [POLL]”