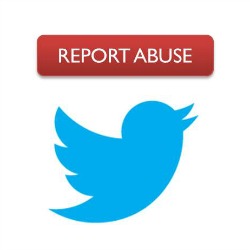 Good idea, said the Bank of England. Then, all hell broke loose.

For nearly 48 hours following last Thursday’s announcement that Jane Austen’s likeness would grace the £10 note starting in 2017, the death and rape threats poured in from Twitter.

According to Criado-Perez, during that period, she received a flood of internet trollery ejaculated at the rate of 50 pieces of scum per hour.

On Sunday night, police arrested a 21-year-old man in Manchester in connection with the hostile tweets.

Over the weekend, the vitriolic storm had serious repercussions for Twitter, which is now looking at a threatened boycott for its failure to stop this kind of abuse.

As of Wednesday morning, a Change.org petition calling for Twitter to add a “report abuse” button to its service had attracted 106,258+ supporters.

TechDay reports that Twitter will work on such a button, added to all messages, though it’s already available on iPhone apps.

The company plans to expand the function to Android and beyond.

As it is, Twitter’s existing rules call for suspension of accounts that get reported for abuse of its rules.

That, obviously, wasn’t sufficient for many people.

In the fallout from the Criado-Perez incident, Mark S. Luckie, manager of Journalism and News on Twitter, was forced to lock down his account in response to public outcry, TechDay reports.

Beyond the new Report Abuse button, Twitter asked for all police reference numbers and specific tweets so that the company can ensure that both Criado-Perez and Creasy were “connected to the right people for conversations to continue on Monday”, according to HuffPost.

HuffPost reports that Creasy had asked for a meeting with Twitter, along with fellow MP Steve Rotherham “on how we ensure that Twitter is able to comply with the Protection From Harassment Act in Britain.”

Whether or not a Report Abuse button will help curb such attacks is now a matter of debate, as can be seen on Twitter itself.

One user, Simon Evans, suggested that such a button would be used “with all the restraint [with which] the Simpsons used their electric shock buttons on each other.”

On the broader subject of just what, exactly, happens to reports of abuse, the BBC filed a Freedom of Information request.

The request has revealed that more than 1,700 cases involving abusive messages sent online or via text message reached English and Welsh courts in 2012, the BBC reported on Tuesday.

That represents a 10% increase on the figures for 2011, according to the Crown Prosecution Service (CPS).

Many users of Twitter, along with other platforms, make threats of murder or death, often meant as jokes.

It’s important to bear in mind that such threats are a criminal offense in many places, regardless of whether they spout from a pugilistic mouth or via email, blog, phone call, or newspaper ad.

Here’s a blurb from the law in the US state of Alaska:

Under California law, a death threat of any kind, whether it’s meant as a joke or not, is a misdemeanor punishable by up to a year in prison and restitution payments for any personnel, emergency response, or property damage the threat causes, according to attorney Daniel Jensen.

If you plant a fake bomb and issue a death threat, even as a joke, you can be fined for the full cost of containing and disposing of the fake bomb. Depending on what cleanup services are needed, if any, these fines could be substantial. OK, sounds serious. Do such laws actually stop anybody? If so, you’d think that internet trolls would be lawsuited into oblivion, right?

There have been scads of court cases involving intimidation-via-social media, but what’s the likelihood of anybody actually getting convicted and penalized?

Well, that’s a good question, I told myself.

Short of prosecution, what do you think about Twitter’s Report Abuse button?

Your thoughts are welcome – particularly since somebody(ies) behind the magic curtain at Naked Security headquarters, praise be, keeps troll comments from getting published.