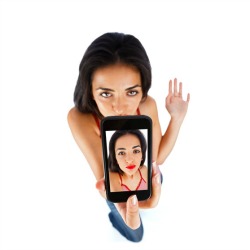 Have you ever hesitated before sharing a photo on Facebook of yourself, stark naked, vomiting into things that are not meant to be vomited into, and/or falling asleep in your oatmeal?

Now you can blindly put your faith in a new app, Secret.li, to supposedly control who sees your truly embarrassing Facebook photos and for how long. It promises that once the time period you’ve specified expires, your egregious photo magically blips out of existence, deleting itself from the app and from Facebook.

No worries about security, either, the app’s developer promises.

Your photos will be protected with the use of a “safety filter”, whatever that means.

This is great, just great. People’s naked photos won’t come back to haunt them, nor will anybody ever again lose a job opportunity because of their well-documented weekend activities.

I guess we could compare Secret.li’s premise to that of its predecessor, Snapchat, which promised a similar thing – magically poofed-into-oblivion-photos – with texting or sexting or what have you. Except when they don’t.

Sharing with Snapchat entails your images – be they porny, barfy, or “just fire me now” – being stored both on Snapchat’s servers and on recipients’ phones, though marked “not for display.”

Sound too hidden away, too tough to sniff out unless you’re a bored security researcher? Well no worries there, because somebody recently cooked up an anti-Snapchat app. For $1.99, the app, called Screenshot Save for Snapchat, keeps those images on hand forever, for as long as the recipient likes, thereby enabling them to be saved “for easy sharing with friends!”

Secret.li is available on the app store, for use on the iPhone 3GS or later.

The app applies a filter to transform your updated images into a lovely mass of pixels. You can make the image accessible for a certain period of time, to a chosen set of people.

Who, one would desperately and perhaps naively need to hope, don’t lunge for a screen capture or to simply snap a photo of their screens.

The only thing that other people will see in your newsfeed is a colorful mess of pixels.

Is this app a bad idea? Oh, I don’t know. It sounds about as safe as Snapchat when it comes to keeping your images private. (*cough!* *wouldn’t trust it, nor my friends!* *cough!*)

But let’s get real.

We’re all familiar with Greek statues. Obviously, their main point in existing is to demonstrate that people have been sexting with nudies back before electricity was even a spark in Edison’s brain.

If you’re going to continue in the capture of nude self-portraits or those that involve regurgitation, just please don’t put too much faith in an app that promises self-destruction.

As Snapchat’s history has shown, in those waters be dragons.

3 comments on “Is this Snapchat clone really an end to your embarrassing Facebook photos?”