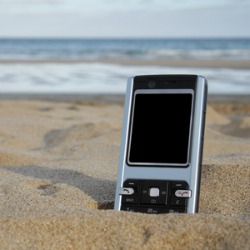 They were two strangers on a Spanish beach.

They passed each other in the night – a night that neither would forget, and a night that changed them both… forever.

Yes, the life of the one they now call “douchebag” was changed because, as of that night, he had a nifty new iPhone, stolen from a skinnydipping tourist.

The tourist’s life was changed too, plunged as she was into remorse and an unquenchable thirst for vengeance.

Not to mention her spiffy new hobby of chronicling the life and times of the thief, who, apparently, can’t figure out how to turn off the auto-photo upload feature on the stolen phone.

Of course, we can’t actually be sure that a phone was stolen or, if it was, that the man in the photos is actually the thief or was knowingly involved in any criminal activity but the victim/blogger claims to have identified the thief as a young man who lives in Dubai.

The chronicle of the alleged crime can be viewed on the victim’s Tumblr site, which is titled Life of a Stranger Who Stole My Phone.

On 28 July, she told the tale of winding up at a beach, “hopelessly drunk and naked in the sea”, 5 hours after having landed in “Ibiza/Spain”.

When she and her friends emerged, dripping and starkers, everything was gone from the deck chair: money, purses, smartphones, passports, birthday presents, and clothes.

"well, that sucked quite hard."

The hotel receptionist apparently told the wet, drunk, semi-nude group that he couldn’t help, that this happened, “like every day”, and that nobody cared anymore.

According to the victim, the theft went down like this:

"apparently some guys with night-vision glasses hid in the dunes, waiting for drunk tourists to leave their belongings somewhere unobserved. then they crawled through the sand, stole the stuff and walked away like nothing happened."

But wait, drunken tourist lady who’s probably sober by now, why couldn’t you find your phone by switching on its GPS tracking function with Apple’s Find My iPhone app (which, of course, you could alternatively do with Sophos’s free Mobile Security app if the guy had instead taken your Android)?

Unfortunately, tools such as Find My iPhone don’t often work.

Jesse Hollington at iLounge describes the myriad ways that thieves can get around such phone-finding tools:

Most thieves are smart enough to wipe a stolen phone and destroy the SIM card.

This one, though, either didn’t care enough to turn off the feature that uploads photos to Dropbox whenever the phone connects to WiFi, or he didn’t care about his victim being able to see him doing lots of fun things with her phone.

But there’s more! Apparently, in December 2012, the victim’s friends asked why they were getting hit on by a guy via her Skype account.

Now-sober tourist lady, you probably realize by now that the Skype trespassing gets to the nub of what’s particular painful about phone thievery beyond the loss of the device itself: namely, the loss of data, and the loss of privacy that this ushers in for both you and your contacts.

Find My iPhone will remotely wipe your phone, as will Sophos Mobile Security for Android, but alas, the same problems mentioned above with finding the device might well come into play with remotely wiping it, too.

You’re right, it does suck, really, really hard, that your phone was stolen, particularly by a yahoo who does stupid things like play with perspective to make it look like he’s holding a tiny person in the palm of his hand. (She’s far away. We know that she’s not a tiny person in your hand.) Hopefully, you’ve already learned some of these lessons and are applying them to whatever phone you bought to replace that iPhone, but if not, please do give them a look before you go on your next beach trip.

Image of phone in sand courtesy of Shutterstock. Hand image courtesy of Life of a stranger who stole my phone

25 comments on “Saga of a stolen iPhone, as told by a trail of automatically uploaded selfies”