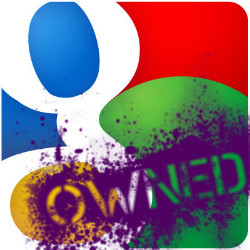 Google’s domain serving the Palestinian territories, Google Palestine, was hijacked on Monday by hackers urging Google to rename Israel to Palestine in Google Maps (and the rest of us to listen to Rihanna).

It seems that the DNS entries for google.ps (the records that associate a user-friendly name like example.com with a computer-friendly IP address like 203.0.113.42) were somehow altered so that users were directed to a server in Morocco instead of the servers hosting Google’s services.

Visitors directed to the interloping server were shown a web page with the familiar Google logo and  a screen shot of Google Maps alongside a missive from the triumphant hijackers. Google Owned
No News Is a Good News
Cold z3ro - Haml3t - Sas - Dr@g
From Palestine: We are the Best of the Rest

uncle google we say hi from palestine to remember you that the country in google map not israel. its called Palestine

#Question : what would happens if we changed the country title of Israel to Palestine in Google maps !!!

it would be revolution ...

So Listen to rihanna and be cool 😛

The perpetrators identified themselves only as Cold z3ro, Haml3t, Sas and Dr@g but their page featured a link to the Palestine Anger Network’s website (a website notable if nothing else for its proud use of the <marquee> tag – a bit of code so rare and inelegant that it could be considered the Kakapo of the HTML world).

By Tuesday the offending page had gone and normal service had been restored.

Speaking to The Washington Post, Google offered the following explanation for the hijack.

Some users visiting google.ps have been getting redirected to a different website; Google services for the google.ps domain were not hacked. We’re in contact with the organization responsible for managing this domain name so we can help resolve the problem.

We don’t know how the google.ps domain name records were compromised but recent attacks on high profile websites have shown that attacking a site’s DNS is often easier than attacking the site itself.

Google’s tormentors remind us that no matter who you are your security is only ever as strong as the weakest link in the chain.