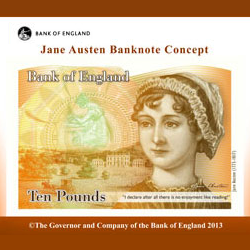 Twitter has lived up to its promise, made a month ago, to make it easier and more obvious how to report abusive messages published on its microblogging site.

The combination of Twitter’s short messages, high volumes and “always logged in” style of use make it easy for internet pests (and worse) to pepper victims with the internet abuse equivalent of never-ending birdshot from a auto-repeating shotgun that never runs out of ammunition.

UK journalist Caroline Criado-Perez found this out to her personal alarm recently.

She’d run a campaign to promote the idea that a well-known female British persona should be included on UK banknotes.

With social reformer Elizabeth Fry giving way to Sir Winston Churchill on the £5 note, Criado-Perez thought that another woman might usefully be drafted in to take the place of one of the men on the other banknotes.

When it was announced that the author Jane Austen would grace the £10 note, not everyone was happy at the result, and Criado-Perez was blasted by at least one detractor’s considerable anger.

She was swamped with a giant wave of abusive Tweets, reaching a peak rate of close to one a minute and allegedly including threats of sexual violence, for which a 21 year old man was arrested in Manchester, UK.

A petition quickly started to urge Twitter to make it easier for victims of this sort of online rage to report their problems.

It worked: Twitter agreed, and now it’s easier to do something about problem tweets.

→ You have to be logged in to get the Report option, which makes sense. This makes it easier for Twitter to sort out abusers of the abuse button, by tying complaints to a specific account, and thus preventing the abuse queue from being flooded by anonymously-reported complaints. And you can’t report your own Tweets, which make sense too. (If you think they should be deleted, just delete them!)

The next step is to choose your reason for reporting the Tweet, which defaults to Abusive: Note that you can also report two other common Twittersphere problems in a similar way, namely Spam and Compromise. (The latter is a good way to help your friends if you realise before they do that someone has nabbed their password and is now misusing their account.)

There’s still more to abuse reports, since you need to say what sort of badness the offending Tweet has displayed:

And then you are asked to provide yet more information, such as this for the Report an ad option: It sounds long-winded when shown here, but the system does make you think about what you want to report, and it’s definitely helpful to Twitter to pre-filter the abuse reports into various categories so that its responses can be prioritised.

You can argue that Twitter ought to have had this all along, and decry the microbloggers for being slow to the abuse-prevention table.

Or you can chalk it up as a victory for common sense, and say, “Well done” to the organisers of the petition for not trying to prove their point by more, well, pointed means (such as hacking back, or some sort of counterabuse), and say, “Thanks, Twitter for listening and reacting quickly.”