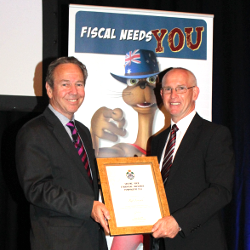 If you’ve been reading Naked Security for a while, any or all of the following might ring a bell:

As quickly as I dare, let me run you through them.

Twelve years ago, QPS realised that cybercrime was costing Queensland alone, only the third most populous state in Australia with about 4.5 million inhabitants, many millions of Australian dollars a year.

Most of that money was leaving the Australian economy forever, often as cash transfers, stolen by crooks who had never set foot in Australia, and probably never would. This was not a problem that QPS could solve without building partnerships with the computer security industry and with fellow cybercops overseas.

So they started up Project Synergy, a series of activities, including annual conferences.

Sophos has been an enthusiastic supporter of these events right from the start.

That’s because the events are intended not only to bring together practitioners from around the world who share an interest in helping to protect our economies from cybercrime, but also to agree on some activities for the year ahead that will actually do something about it.

Sophos’s Signature Luncheons, which have been running in the Asia Pacific region for about the last ten years, are our own sort of Project Synergy.

In the words of someone I know very well, these events are intended to:

bring together experts and thought leaders in IT security for frank and open debate about the future of computer security.

We use the Chatham House Rule, which means you can tell other people what was discussed, but without mentioning who said what.

This encourages openness and the sharing of information, since all of us, competitors though we might be in day to day business life, face a common enemy: the cybercrooks.

The Signature Luncheon series has helped us not only to keep track of the changing nature of security threats, but also to agree on some activities for the year ahead that will actually do something about it.

Anyway, to close the circle: earlier this week, at the Queensland Police Fraud and Corporate Crime Symposium 2013, Sophos was honoured with a Partnership Award from the QPS. The things we did that QPS particularly liked were: providing educational material for community groups; hosting the Signature Luncheon events to explore current and emerging issues; and raising greater awareness in the government and business communities regarding fraud and cybercrime.

We appreciate the recognition; we salute your efforts in tackling cybercrooks head on; and we look forward to more Synergy in 2014.

PS. Let me say publicly what a great job Sophos Australia Marketing has done, all these years, to run the many Signature Luncheons we have held. They take a lot of organising – just getting IT security speakers lined up is like herding cats, and that’s before you arrange a venue, and an audience, and, of course, the luncheon itself. Thanks, guys.

4 comments on “Sophos honoured with Partnership Award by Queensland Police”