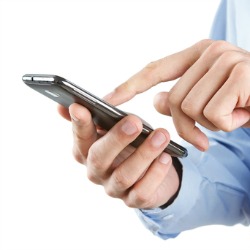 A study has found that men are almost twice as likely to snoop on their partner’s mobile phone, peeking without permission to read “incriminating messages or activity” that might point to infidelity.

The study, which came out of www.mobilephonechecker.co.uk and was written up by The Telegraph, found that out of 2,081 surveyed UK adults currently in a relationship, 62 per cent of men said they’ve peeked at a current or former partner’s mobile phone without permission.

That compares to 34 percent of women who admitted to doing so.

Most of those – 89 percent – who admitted to mobile snooping said they did so to check on conversations that might stray into the romantic or sexual and thereby indicate signs of infidelity.

How did the snoops crack the phone’s passcode or password? Easy enough, no hacking involved: 52 percent said that they already knew the credential.

Out of those who mobile-spied, 48 percent confessed that they did, in fact, find incriminating evidence of unfaithfulness.

And out of that lot, 53 percent said they got tipped off by reading text messages, while 42 percent got wind of it through direct Facebook messaging – the two most common means of ferreting out infidelity.

Many of us, evidently, cherish fidelity over our loved ones’ rights to privacy. So how do the survey participants feel about all that?

The study found that 31 percent of those surveyed said they’d end their relationship if they found that their partner had rifled through their messages.

Another 36 percent said that they wouldn’t wind up in that situation to begin with, given that they’d never find themselves in a position where their partner could conduct a highly personalized, mini-NSA surveillance campaign against them.

But how exactly do you prevent your partner – or random strangers who find your lost phone, or thieves for that matter – from reading your private text or Facebook messages?

(None of this is to condone sneaking around on your partner, mind you. Better off signing up with the polyamorous camp and being honest about it all, if you ask me.)

Privacy is privacy and deserves to be protected, I submit, whether we’re talking about covering philandering tracks, avoiding data abused in recrimination after a bad breakup, or protecting political activists.

How do you keep your partner from prying? Fortunately, it’s safe to say that most of us are not dating the NSA, so we can assume that the goal is achievable.

An obvious step to take, of course, is to avoid sharing your mobile phone passcode or password with your partner.

And regardless of protecting one’s dalliances, it’s important to protect mobile phone data, given what’s at stake if you lose your phone.

As Sophos found in an October 2012 study, 42 percent of devices that were lost or left in insecure locations had no active security measures to protect data.

Dire as the consequences of discovered infidelity might be, lost devices point to a much wider world of jeopardized privacy.

We’re talking here about mobile data that could give access to work email, potentially exposing confidential corporate information; sensitive personal information such as national insurance numbers, addresses and dates of birth; payment information such as credit card numbers and PINs; and access to social networking accounts via apps or web browser-stored cookies.

So keep it safe!