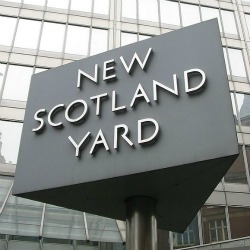 Police are investigating yet another British newspaper group in the phone hacking scandal that was brought to us courtesy of the now-defunct News of the World and its parent company, News International.

On Thursday, news group Trinity Mirror said that the police were investigating whether the company was criminally liable for allegations of “unlawful conduct” by ex-employees of the Sunday Mirror, according to the New York Times, among other sources.

The Wall Street Journal reports that Trinity Mirror, who own the British tabloid, said that London’s Metropolitan Police are investigating possible criminal liability for alleged illegal phone hacking carried out at the Sunday Mirror.

Trinity Mirror said in a statement that it’s not accepting wrongdoing and that it’s too early to be able to predict where this all will go:

The Group does not accept wrongdoing within its business and takes these allegations seriously. .... It is too soon to know how these matters will progress, and further updates will be made if there are any significant developments.

Media mogul Rupert Murdoch closed his tabloid, The News of the World, in July 2011 after it came to light that its employees had hacked into mobile phone messages of Milly Dowler, a teenager who had been abducted and was later found murdered.

In March 2013, London police announced that they had arrested four journalists or former journalists of the Mirror Group Newspapers on suspicion of phone hacking.

According to the Wall Street Journal, police on Thursday put out a statement saying that they’re investigating a “suspected conspiracy” that “mainly concerned the Sunday Mirror newspaper in 2003 and 2004”.

Beyond phone hacking, Metropolitan Police are also investigating allegations that journalists hacked computers or bribed police or public officials as they sought information.

Police are also investigating whether the arrested journalists’ employer bears corporate responsibility for any wrongdoing.

Prosecutors said on Thursday that they’re charging Ben O’Driscoll, former Deputy News Editor at News Corp’s tabloid, the Sun, with one count of conspiracy to commit misconduct in public office.

They also alleged that between 2007 and 2011, Mr O’Driscoll “authorised payments of at least £5,000 to public officials, including police officers and employees of Broadmoor secure hospital, in exchange for information,” including information about the health of Broadmoor patients, according to the Wall Street Journal.

So how does phone hacking work?

It can actually be fairly simple, as mobile phone security expert David Rogers of blog.mobilephonesecurity.org explained after the tabloid fiasco initially erupted.

It’s not really “hacking” at all, Rogers said at the time.

Rather, the misdeeds have to do with illicit access to voicemail messages.

Many of the problems that arose from journalists getting their hands on voice messages have to do with well-known, default PINs for voicemail access, he said.

He gives a pair of homework assignments for finding out what the remote access number is for your voicemail and how simple it might be for somebody to “hack” your number by simply calling and entering a default PIN (which can be as simple as the last digits of your phone number, for example).

Call yourself and see what happens. Let us know how easy it is to hack your voicemail in the comments below, and then go change that default PIN!