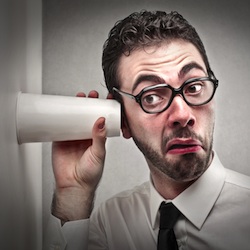 It was his first day on the job at the National Security Agency (NSA), so he did what anybody would do, if you define “anybody” as “somebody who completely ignores rules meant to protect the privacy of both foreign and US persons against federal abuse of surveillance powers”: the new agent snooped on his former girlfriend.

In a letter [PDF] dated 11 September, NSA inspector general Dr. George Ellard detailed 12 investigations into such “intentional and and willful misuse” of spying tools by civilian and military NSA employees.

Two of the investigations are still open, Ellard wrote in his letter to the ranking member of the US Senate’s Judiciary Committee, Senator Charles E. Grassley, while another allegation is being reviewed for possible investigation.

The agent who ambitiously jumped into illegal snooping on his first day on the job was a military member stationed at a site in the continental US, Ellard’s letter says.

The unnamed subject queried six email addresses belonging to a former girlfriend – a US person – without authorization.

Why did he do it?

Well, he wanted to “practice on the system,” he testified, and decided to use his former girlfriend as a cyber-information guinea pig.

The subject reportedly didn’t get any information out of the system and hadn’t read any US person’s email. He received a reduction in grade, 45 days restriction, 45 days of extra duty, and half pay for two months.

Also, it was recommended that he not be given a security clearance.

According to the NSA’s description, SIGINT’s mission is “specifically limited to gathering information about international terrorists and foreign powers, organizations, or persons” that provides “a vital window for our nation into foreign adversaries’ capabilities, actions, and intentions.”

Technically, checking on whether your spouse is cheating on you or whether somebody you bumped into at a bar is date-worthy is not part of the NSA’s plan.

Nonetheless, seeking a vital window into their partners’ escapades, sexual or other, is precisely the mission that some NSA employees have chosen to pursue.

In at least 6 of the 12 instances reported by the inspector general, the matters were referred to the Department of Justice. In multiple instances, the NSA employees resigned or retired before being disciplined.

Jameel Jaffer, deputy legal director at the American Civil Liberties Union, told Reuters that the seeming handful of NSA employees who abuse their powers are probably just “the tip of the iceberg” and that the real issue is, rather, the massive amount of surveillance that’s actually legal for the NSA:

If you only focus on instances in which the NSA violated those laws, you're missing the forest for the trees. … The bigger concern is not with willful violations of the law, but rather with what the law itself allows.

As Mother Jones’s Dana Liebelson commented recently, it seems that not a week goes by wherein we aren’t provided with “a friendly reminder from former NSA contractor Edward Snowden that the government has found a new way to spy on us.”

One of those bills – The Surveillance State Repeal Act (H.R. 2818) – would actually repeal the PATRIOT Act and the 2008 amendments to the Foreign Intelligence Surveillance Act (FISA): the statutes from whence the NSA draws its broad spying powers.

... keep the NSA from sweeping up phone records en masse, take the rubber stamp away from the top-secret spy court that approves surveillance requests, and allow tech companies to tell the public more about the government requests they receive for user data, among other things.

We wait to see what happens.

And all you former, current or future love interests of NSA employees – known, romantically enough, as “lovints” in NSA speak – be aware: the walls have ears.