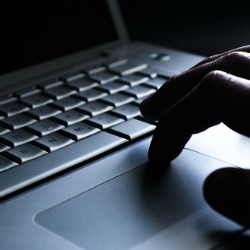 A stalker who’s already been jailed – twice – for harassing a former Welsh beauty queen was again arrested on Wednesday, this time for tagging her as “slut” in a Facebook photo.

According to the Mail Online, Anthony Mantova, 35, of Meliden, Prestatyn, Wales, was sentenced the first time in July 2012 to 18 weeks in prison after pleading guilty to harassing the 21-year-old singer, Chloe Hopkins.

At the time, he was given an indefinite restraining order banning him from contacting her or creating any communication about the young woman.

The Daily Mail’s timeline of his stalker creepiness is a bit hard to figure out, but at some time Mantova “fell out” with Ms. Hopkins, the newspaper reports.

He reportedly flooded her with text messages, made lewd Facebook comments, and “followed her.”

The paper doesn’t say whether that means physically or cyber-ly, but, given that he has the woman’s name and three of her friends’ names tattooed on his chest, and that he appears in public wearing a t-shirt he had printed up to feature a picture of Ms. Hopkins, one assumes that it means both.

In the first case against Mantova, the court heard that while the beauty queen was Miss Prestatyn 2010, Mantova suggested that her tiara and sash “would look good on his bedroom floor”.

In November – 2012, I assume – he admitted to breaching the first restraining order and was jailed for another 28 days.

Four months ago, he did it again.

Prosecutor Richard Edwards told the court that in March, Ms. Hopkins’s boyfriend received a Facebook request from Mantova asking to tag a photograph. He “accidentally” allowed the tagging, according to the Daily Mail.

Mantova then plastered the word “slut” onto Ms. Hopkins’s forehead.

Mantova once again admitted to having broken the restraining order with this most recent go-round.

His lawyer, Frances Hertzog, pointed out that when Mantova was last imprisoned, he left jail in a wheelchair.

In fact, he has multiple sclerosis, and his attorney said his health might be at risk from further imprisonment.

His grave concern is incarceration is going to have a detrimental impact on his health.

Judge Peter Heywood replied that a victim impact statement shows that Mantova’s harassment has had significant impact on Ms. Hopkins:

It has affected her health significantly. She’s had to undergo counselling and lost time at work.

Your actions have had a devastating effect on her.

It’s so easy to agree to letting others tag your photos, as well.

Naked Security has already given you these 5 tips on staying safe on Facebook, but it’s a topic that one fears might push toward being encyclopedic, so we gave out 5 more tips here.

The very first of those safety tips – showing your profile only to Friends seems like it might – should? – help to keep stalkers at bay.

At least, I hope it would.

But how can we protect ourselves on Facebook – or in any realm of our lives – against harassment like this?

Prison obviously isn’t working to help this man with his obsession, and it’s certainly not keeping Ms. Hopkins from ongoing harassment and all the stress it brings.

Let’s hope that this time around, if Mantova again faces a prison sentence, he gets the help he obviously needs.