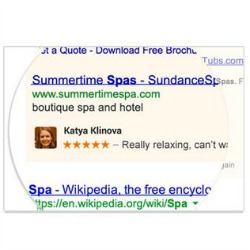 Some Google users who don’t want their faces used to pimp bagel shops (or spas, or Nexus 7, or whatever ads Google can squeeze money out of) are replacing their photos with one of Executive Chairman Eric Schmidt.

The backlash – the scope of which could be tiny, for all I know, given that news of it apparently comes solely from a retweet by Daring Fireball’s John Gruber – apparently is in reaction to Google’s announcement to grab user’s profile pictures, names, photos and product reviews as harvested from Google+ and plug them into advertisements.

Google announced new Terms of Service that will go live on 11 November which explain that it will use content in this way.

On top of our images, Google will also display reviews of restaurants, shops and products, as well as songs and other content reviewed or bought on the Google Play store, when our friends and connections search on Google.

Of course, the move is a no-brainer for Google.

Google doesn’t make any bones about it. The company said in an annual report from 2012, “We generate revenue primarily by delivering relevant, cost-effective online advertising.”

The move is identical to Facebook’s Sponsored Stories boondoggle, with one exception: It’s looking to not be a boondoggle. Google is doing it right.

Namely, Google is offering users a way to opt out, and that will in all likelihood sidestep the legal swamp that Facebook fell into over Sponsored Stories.

For its part, Facebook paid out $20 million in a personal ads class action lawsuit settlement in August 2013, and another $10 million to settle a lawsuit in 2012.

Antagonising Google by swapping a profile photo for Schmidt’s may feel like fun, in-your-FACE-Google! hijinks, but the chances that Google will roll back the tasty revenue source are approximately, in rounded percentage points, “hahahahahaha!”

It’s likely that the only way to opt out is to opt out.

Here’s how to opt out of Google’s Shared Endorsements:

Google will grab at your ankle to try to drag you back into advertising land, but one extra click saying “Yes, I do, in fact, want to unpeel my mug from your advertisements” won’t kill us, I suppose.

UPDATE: Many readers have asked if this will impact users with Google Accounts who haven’t enabled Google Plus. Are they already opted out or do they have to climb further into bed with Google and enable Google Plus account just to opt out? Google’s information is ambiguous on this point. We have asked them for clarification and we’ll update this article when we have an answer.