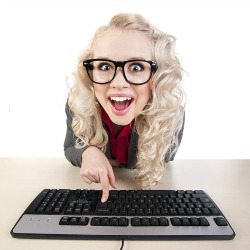 A woman from South Milwaukee, Wisconsin, faces stalking and identity theft charges after she allegedly hacked into her ex-boyfriend’s email and stole information not only on him, but also on his other love interests.

According to local reports, Phoebe Sayavong is alleged to have “hacked” the email account of her ex (read – guessed or figured out the password), locked him out of the account and accessed personal information on the him and other woman he had dated.

She is then thought to have set up accounts on social media sites, including Facebook, Pinterest and LinkedIn, using nude or partially-nude photos of the women – in some cases it’s thought the pictures were faked by merging the women’s faces with other photographs – and then sending friend requests to the families of the women targeted.

Most disturbingly, at least one of the women reported being visited at home by a man who thought he had met her online and had been invited over to have sex with her.

Sayavong’s stalking stretches back to as early as May this year, and is believed to have included repeated phone calls and drive-bys of her former lover’s home in Racine County, Wisconsin, spraying his car with soft drinks, and spreading garbage on his lawn.

She is also claimed to have found out her victim’s social security number, and read it out to him over the phone.

She faces multiple identity theft charges as well as one each of stalking, recklessly endangering safety and “distributing a recording of nudity without the subject’s consent”. The latter is considered a felony under Wisconsin legal code.

It seems it’s not enough to be careful about keeping our own systems and accounts secure, we have to pay close attention to who we share information with and how well they maintain their security.

Of course, it’s probably never that wise to go sending intimate photos of yourself to anyone, however well you trust them. Remember, anything that’s on the internet is a) unlikely to remain entirely private, and b) never going to go away.

Email may feel safer than posting to a public website, but really it’s just another part of the internet and should be subject to the same rules.

Leaving aside the issue of personal pics, most people probably feel OK about letting their boyfriends know all manner of things about them that they wouldn’t want all and sundry to hear about, but it’s worth remembering just how useful our personal info can be to bad actors.

Even basic info like names and addresses seems to have been used for some pretty creepy purposes in this case.

It’s best to be as cautious as possible, and if you think someone you’re entwined with may be at risk of being a hacking target – if they have a rather worrying ex-girlfriend for example – be sure to remind them of the importance of good computer and password hygiene.

Even if they do no more than the basic essentials, that’s a start at least.

The same goes in the business world too. If you have to share data on yourself or your clients or customers with third parties, make sure you know what steps they are taking to keep your data secure before you hand anything over.

Image of woman on computer and password courtesy of Shutterstock.