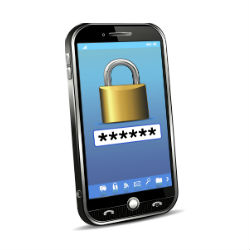 Most smartphones can be secured to a degree, via the use of a PIN, pattern lock or, in the case of the latest iPhones, with a fingerprint.

The particular security feature that you choose for your smartphone may well be determined by the make and model that you own, but one of the most popular options is to use a PIN (if you have a choice we recommend you secure your phone with a password).

A new program, dubbed PIN Skimmer by its University of Cambridge creators, can correctly guess a high proportion of PINs using the device’s camera and microphone.

The university team discovered that PIN Skimmer could identify PIN codes entered on number-only softpads by using the camera on the device to monitor the user’s eye movements as they enter their code. Also, the microphone could be used to detect “touch events” – the clicking sound made as the user enters their PIN on the touch screen.

The paper, written in order to raise awareness of side-channel attacks on smartphones, took the approach that the device had already been infected with malware that was then attempting to snaffle the PIN.

The university team then set out to see how effective an attack could be and, also, how PIN length may affect the likelihood that the code could be correctly guessed.

Mimicking a typical piece of malware, stealth was a key feature in the design.

The researchers ran image processing algorithms remotely to minimise battery drain, something that could alert the user that an unauthorised program was running.

An API exposed by the Android operating system was used to disable the LED that switches on in some handsets when the camera is in use.

Photos and video taken by PIN Skimmer were saved to the phone but the file sizes were limited to 2.5MB to reduce detection. A real piece of malware could likely hide such files from view completely. Likewise, the research team hypothesised that the sending of data back to the remote server could also be hidden from the user.

Additional network charges is another problem connected with transmitting data. Many smartphone users are on tariffs that charge them additional fees should they use more than a pre-determined amount of data within any monthly period. To that end the report suggested that a real-life Trojan would probably report back to its control centre only when it detected a free WiFi connection within range.

The researchers discovered that, contrary to what you may have expected, longer PINs were actually easier to crack than shorter ones. This unexpected result was put down to the fact that longer PINs actually gave the program more information to work with which increased its accuracy.

One of the co-authors of the report, Professor Ross Anderson wrote:

Our work shows it's not enough for your electronic wallet software to grab hold of the screen, the accelerometers and the gyro; you’d better lock down the video camera, and the still camera too while you’re at it. (Our attack can use the still camera in burst mode.)

As for mitigating the risks posed by such an attack, Anderson suggested that questions need to be asked as to which resources should remain accessible during PIN entry, though he did note how disabling some functions, i.e. the speakers, could cause extreme problems to the usability of the device:

For instance when a call comes in, the user needs to hear the ring tone while unlocking his phone; otherwise he may assume the caller has hung up.

Instead, he suggests that whitelists may be the answer – denying use of all resources during PIN entry, unless explicitly authorised.

Another option, according to Anderson, would be a more widespread adoption of biometrics in smartphones but that is not without its own issues.

For now at least this attack is an academic exercise. For advice on tackling the real world threats to your phone read our 10 tips for securing your smartphone.

One comment on “Smartphone PINs skimmed with microphone and camera”