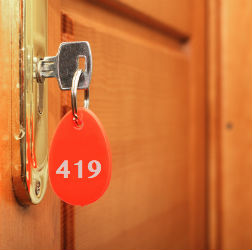 When South African police visited a hotel room to investigate reports of a marijuana smell, they got more than they bargained for.

On entering the room at the Lagoon Beach Hotel in Milnerton, a suburb of Cape Town, they found laptops, mobile devices and documents indicating a bustling advance fee fraud campaign, according to local news reports.

The room contained three laptops and nine mobiles, all connected to the internet. One of the laptops showed a half-finished bank transfer of R359,000 (over £21,000, $34,000), while another displayed someone’s banking login details.

A notebook was also found, with details of multiple foreign women, as well as a quantity of cannabis, referred to as “dagga” in local slang.

Western Union money transfer records connected to the investigation showed multiple transfers from many victims. The Australian woman, named as Marie June Leicester, claimed to have been tricked out of her cash by someone using the name Anthony Donald Caine, and the name Caine appeared in several of the records.

Hotel rooms have traditionally been used by all kinds of criminals, providing privacy and anonymity and allowing all sorts of people to come and go without anyone knowing who is meeting who.

Now it seems as though that useful anonymity has spread to the internet, with hotel connections making it harder to track people down.

Advance fee fraud is also known as the “Nigerian letter” or “419” scam, after the relevant entry in Nigeria’s criminal code. Perhaps unsurprisingly, two of the men arrested in the room on drugs charges turned out to be from Nigeria.

The 419 scam is likely to be familiar to most if not all email users – it’s the one where someone you’ve never heard of mails you out of the blue claiming they have an improbably large amount of money they need “help” accessing, or transferring somewhere, or that they simply want to give away.

Once a victim has expressed an interest, the scam then moves into money-making mode, persuading the victim that if they can just put up a small amount of cash to cover legal fees, bribes or some other invented purpose, the vast wealth will be theirs.

Over time these small fees mount up, with victims sinking ever deeper into the trap, throwing good money after bad in the belief that if only they can overcome the next little hurdle they will be rich.

Of course, they only ever end up out of pocket, sometimes by huge amounts.

So, if you’re ever tempted by one of those emails from the relatives of a wealthy oil man, a dodgy lawyer or a soldier who’s found a stash of hidden gold, remember Marie Leicester and the many others reduced to penury by these scams, and turn your skepticism meter back up to full.

On the other hand, if you’re a cybercriminal running a scam from a beachfront hotel room, and you feel like a smoke to celebrate ripping off your latest innocent victim, go ahead and blaze one up, the smellier the better.