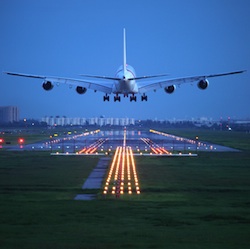 European travellers will soon be able to use their personal electronic devices (PEDs) for the entire duration of their flights following a new ruling from Europe’s air safety agency.

The European Aviation Safety Agency (EASA) has approved the use of some electronic devices during all stages of a flight. A full list of allowable electronics, along with details of safety testing, will be published by the end of November 2013.

The EASA are likely responding to a similar change of policy by the US Federal Aviation Administration (FAA) which itself opted to allow a more widespread use of in-flight electronics on October 31.

From the FAA’s press release:

The PED Aviation Rulemaking Committee (ARC) concluded most commercial airplanes can tolerate radio interference signals from PEDs. In a recent report, they recommended that the FAA provide airlines with new procedures to assess if their airplanes can tolerate radio interference from PEDs. Once an airline verifies the tolerance of its fleet, it can allow passengers to use handheld, lightweight electronic devices – such as tablets, e-readers, and smartphones - at all altitudes.

Currently, European flyers with smartphones, tablets and other personal electronic devices can only use them in-flight and not during taxiing, take-off or landing.

The new rules, however, will allow some items to be used at all times, as long as they are in ‘Flight Mode’ or ‘Airplane Mode’, though sending text messages, making voice calls or using mobile data will still be prohibited.

While the ban on in-flight phone calls continues, the EASA are examining the possibility of relaxing the rules in the future, saying that:

In the long term, the Agency is looking at new ways to certify the use of mobile phones on-board aircraft to make phone calls. EASA recognises the wide proliferation of personal electronic devices and the wish of the travelling public to use them everywhere.

Even though the agency will permit some additional use of electronic devices during all stages of flights, the airlines themselves will have the final word on what they allow on their own services. It is likely that all will still require larger items, such as laptops, to be stowed away other than when flights are at cruising altitude.

Airlines who wish to allow their passengers to take advantage of the new guidelines will need to present their case to the UK Civil Aviation Authority (CAA) in order to gain approval. The CAA may well be surprised at the timing of the announcement from the EASA, having told CNET earlier this month that it will be “months rather than weeks” before UK airlines could follow the lead of their US counterparts.

The Guardian believes that the new guidelines may be implemented swiftly, quoting a CAA spokesperson who said that:

The airlines now have access to new methodology for the safety testing of devices, which could be a relatively quick process, especially as some airlines are likely to have already done a fair bit of testing

So what do you think – do you welcome this change, or are you quite happy with the current rules as they are?

Image of plane taking off courtesy of Shutterstock.