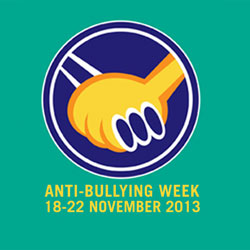 The Anti-Bullying Alliance has been running for 11 years and we started Anti-Bullying Week in 2007. As the National Coordinator for both, I’m delighted to see how much it’s grown, with schools and the media really getting behind the idea of generating awareness and coming up with strategies to tackle the problem.

When does teasing become cyber-bullying?

It’s important to draw distinctions between the two. It’s pretty much a fact of life that all children and young people are going to get into conflicts.

Teasing happens. But if someone says stop, the person doing the teasing usually does so. If we say that it’s a natural part of growing up, then we need to give those young people the skills to deal with it. Teasing and banter is often about context. What’s an acceptable joke made by a friend has a very different effect if made by someone else.

The other thing to remember is that bullying is intentional – it’s the deliberate targeting of an individual or a group. It’s also repetitive behaviour, and that behaviour doesn’t always have to be the same. A negative comment on Facebook, then MSN, then a nasty Vine video are all different behaviours, but the harmful act is repetitive. We call it the “chain of harm”.

How do our lifestyles facilitate cyber-bullying?

Now that bullying goes on outside the school gates, and continues all day long it’s much harder for children to get away from their bullies. Everything is connected.

Smartphones and other devices allow youngsters to put something up online so quickly, wherever they are, and they may not think about the implications. It’s very important to educate kids about how to use them thoughtfully.

Your digital history is like a tattoo. Children and young people need to understand what personal information they are putting online – it’s hard to take it back, and it ends up being the digital identity you create for yourself. What’s online is there for life. Young people don’t necessarily recognise the role they play in colluding with bullying behaviour. It’s common for these ‘cyber-bystanders’ to forward something negative that perpetuates the bullying, without realising they’re part of the problem.

It’s important for parents to recognise the power of the technology they allow their children to use, including age-inappropriate games. Someone might be ok with their son or daughter playing Grand Theft Auto on the Xbox or Playstation, but they might not realise it’s a connected device and enables them to access different communities which may not be appropriate.

I think the risks associated with social networking are more of a problem for girls, and for boys, cyber-bullying can happen in real time with microphones over Xbox and Playstation.

In preventing or stopping their children from being bullied, parents are often tempted to take away their technology. But the youngsters we speak to say they would rather be connected and bullied than disconnected from their friends and social networks.

If children fear their technology will be taken away if something bad happens then they are far less likely to tell their parents if they have a problem with something online.

What’s being done to tackle cyber-bullying?

Good, cohesive advice is very important so parents, schools and organisations can work together and know how to tackle bullying properly. We need strong advice from industry, government and the voluntary sector to help keep children safe online.

The industry also needs to play a part to make it easy for people to find information about reporting abusive behaviour on social networking sites. It takes huge courage for kids to tell someone they’re being bullied, so if we don’t make it easy for them to do that then we are failing them.

The Anti-Bullying Alliance is calling for a National Debate for children and young people. We need everyone to bring their piece of the puzzle so we can better educate, prevent and report on cyber-bullying. Youngsters who have become victims of bullying need coping strategies. Different approaches are needed in the connected 21st century world, and we need to bring ourselves up to date on this issue.

Where can kids, parents and teachers go to get ongoing support?

The Anti-Bullying Alliance website should be the first step, acting as a gateway to further information. We have a broad membership, so there are resources for children and young people and for their parents. For professionals there are video clips featuring experts giving advice.

Part 2: What can parents do to help their children?

While the Anti-Bullying Alliance works with schools and clubs to help create strong relationships, put preventative measures in place and provide education and advice, parents are the ones best placed to support and educate their children on cyber-bullying.

In the second part of this article, Luke gives parents important advice for helping to prevent – and cope with – cyber-bullying.

Image of teenager courtesy of Shutterstock.