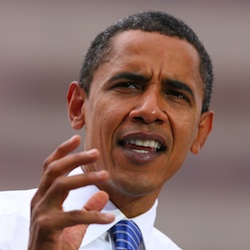 The powers that be won’t let US President Barack Obama use an iPhone because of security reasons, he told a group of young people while pitching his signature healthcare law at the White House.

From the Wall Street Journal’s coverage:

I am not allowed, for security reasons, to have an iPhone.

However, the president’s daughters, Sasha and Malia, do have iPhones and “seem to spend a lot of time” using them, he said.

President Obama is constrained to using a phone from the surprisingly enough still-not-dead BlackBerry.

All things Apple are not entirely forbidden, mind you. Mr. Obama can, in fact, use an iPad to scan news headlines and surf the internet, Vanity Fair reported last year.

What’s so darn scary about the iPhone?

The US government didn’t pass out details so we don’t know if they’ve definitely found something they don’t like or they just haven’t finished looking yet.

If they’re still mulling it over there are a few security-related things they’ll want to look at:

That last predilection actually got Siri banned from IBM, given that Big Blue didn’t take a shine to the idea that transcripts of its employees’ musings would be lying around at Apple.

Another thing that’s historically made the US government shy away from Apple is its apparent allergy to openness.

In 2012, when the US was moving to equip military and government officials with mobile devices, it specifically looked to Google’s Android operating system to meet its security requirements.

Why not the iPhone? Because Apple has never let developers fiddle with its code as freely as Google has.

In February 2011, Apple did make a tentative step toward opening up, offering a copy of the developer preview of Mac OS X 10.7, aka Lion, to security researchers and asking for feedback – by invitation only, and only under a non-disclosure agreement regarding whatever researchers found.

That door wasn’t ajar long. Nine months later, it slammed shut on security researcher Charlie Miller – aka “that Apple 0day guy” – who had the gall to uncover a potentially dangerous bug he found in iOS that allowed unapproved code to be run on iPads and iPhones.

Instead of thanking him for pointing out a dangerous hole with a harmless demo, they ripped up Miller’s license as an Apple developer.

Obviously, Apple has a history of being a bit queasy when it comes to opening up its code.

Likewise, there is nothing surprising whatsoever about the Feds refusing to open the doors of the White House to the iPhone – at least, not to the commander in chief.

Sorry, President Obama. I hope that getting to use your iPad is some consolation.