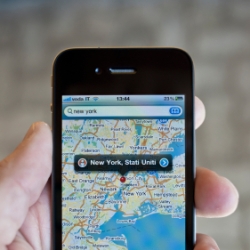 Mobile phones broadcast their location even when they’re not being used to place a call or text and even when GPS is off, emitting signals sent to cell phone towers nearby from wherever we are in the world.

The US’ National Security Agency (NSA) is collecting and storing those locations in a vast database that contains the locations of at least hundreds of millions of devices, at the rate of nearly five billion records a day or two trillion records per year, according to newly released documents from Edward Snowden, the Washington Post reported on Wednesday.

The agency is able to track the movements of individuals and to map their relationships with others, the Washington Post made clear in a video simulation that showed glowing dots traveling in close proximity.

The NSA says it’s not interested in everyone’s data, but the agency collects it as broadly as possible using international authority.

Specifically, the NSA is using Executive Order 12333 to cover the data collection, according to the Washington Post’s Ashkan Soltani.

That order allows them to conduct any surveillance internationally as long as it’s not constitutionally prohibited.

A lawyer for an intelligence agency emphasized to the newspaper that location data are obtained by methods “tuned to be looking outside the United States”. In fact, he repeated that three times, the Washington Post reports.

When US cellphone data are collected, the lawyer said, the data are not covered by the Fourth Amendment, which protects Americans against unreasonable searches and seizures.

Many US persons’ locations are incidentally swept up into this bulk data collection in order to find hidden links to surveillance targets, the newspaper says.

Using its location databases, the NSA applies analytic techniques to find what it calls co-travelers: unknown associates traveling with or meeting with a known target.

The Washington Post has outlined here how the sophisticated data-mining analytics, known collectively as Co-Traveler, work. As a mobile phone passes between cell phone towers, its location is triangulated by the NSA. If a person travels through a city that has lots of foot traffic, potential co-travelers will appear alongside as their own mobile device broadcasts its location to towers.

Using the co-traveler analytics, the NSA can enter a suspect’s name into their system and identify any other people physically located near that person or traveling with them, monitoring the global network of cell phone towers to do so.

How does one avoid being tracked by cell phone towers that track you even with GPS turned off?

Most consumers would likely imagine that turning off their handsets should prevent it from emitting or receiving a signal.

But since Snowden first began to release documents about the NSA, the possibility has arisen that the surveillance agency can trace even a phone that’s powered off.

By September 2004, a new NSA technique enabled the agency to find cellphones even when they were turned off. JSOC troops called this "The Find," and it gave them thousands of new targets, including members of a burgeoning al-Qaeda-sponsored insurgency in Iraq, according to members of the unit.

This possible tracking of powered-down devices could well have informed the advice handed out earlier this year in a leaflet from the US State Department’s Bureau of Diplomatic Security, which warned those traveling to the Winter Olympic Games in Russia to be extremely cautious with communications.

The State Department said that business travelers should be “particularly aware that trade secrets, negotiating positions, and other sensitive information may be taken and shared with competitors, counterparts, and/or Russian regulatory and legal entities,” the document advised.

The department’s list of precautions for ensuring safe communications included removing batteries from phones entirely when not in use.

The state department’s advice might be nothing more than precaution. Then again, the US government could know for sure that powered-down mobile devices are trackable.

Either way, those who care about their privacy and don’t want to be swept up in surveillance dragnets, be it in Russia or anywhere else, should likely err on the side of caution and remove the batteries from their mobile devices whenever they don’t want their movements and relationships tracked.