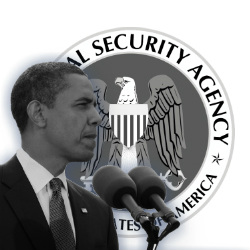 Without going into detail, US President Barack Obama has said that he’ll propose “some self-restraint” to the National Security Agency (NSA) in order to rein in rampant snooping.

In an interview with Chris Matthews recorded for MSNBC’s “Hardball” on Thursday, Obama defended the intelligence agency, saying that it’s keeping its nose clean at home, at least:

The NSA actually does a very good job about not engaging in domestic surveillance, not reading people's emails, not listening to the contents of their phone calls. Outside of our borders, the NSA's more aggressive. It's not constrained by laws.

The president pointed to an outside panel that he set up to look into how the government was collecting surveillance data in the big-data era.

In the fall, he said that the Feds were undergoing a complete review of how US intelligence operates outside of the country.

The findings are due to Obama by 15 December.

But he’s already set to rein in the NSA, he says (if self-restraint can actually be considered a curb of powers, that is):

I'll be proposing some self-restraint on the NSA and to initiate some reforms to give people more confidence. … [given that US persons] rightly are sensitive to needs to preserve their privacy and to maintain internet freedom, and so am I.

The Hardball interview came on the heels of last Wednesday’s revelations that the NSA is tracking hundreds of millions of mobile phone locations worldwide, feeding a massive database full of people’s location and relationship data at the rate of nearly 5 billion records every day.

During the interview, Obama asserted that “we do have people who are trying to hurt us,” but added that with oversight from Congress and from the Foreign Intelligence Surveillance Court (FISC), which oversees requests for data from intelligence agencies, security needs can be balanced with privacy rights.

Many now view that balance as completely askew. Is there any self-restraint the president can propose to the NSA that will redress it? Any limits or increased oversight?

Kevin Bankston, policy director of the New America Foundation’s Open Technology Institute as well as a privacy and digital-rights lawyer and advocate, thinks not.

As he told US News, there’s little short of an end to the NSA’s bulk data collection that could fix this mess:

Rather than allowing the NSA to engage in mass surveillance to collect everyone's data and then decide who to target, the president should ensure that the NSA engages only in targeted surveillance; that is, first, deciding who to target and then collecting only their data.

True leadership in this moment would be for President Obama to say to the American people and to the rest of the world, 'I am putting an end to the NSA's bulk collection programs, because it is contrary to the American way to treat every person who uses the telephone or the internet like a terrorism suspect.'

In the meantime, a number of proposals aiming to increase transparency and oversight of the NSA have been put forward by members of Congress, including the Freedom Act in the House and Senate, which would end bulk data collection.

Do any of these proposals – legislation that attempts to curb the NSA’s data collection and/or propose new oversight, whatever self-restraint Obama proposes – stand a chance when it comes to reining in surveillance run amok?

Or would it require a full stop to bulk data collection? Do you think that intelligence operators are even capable of stopping the use of the powerful analytics tools they’ve created?

Is the lid off of this Pandora’s box for good, to the detriment of privacy?

12 comments on “President Obama to propose “self-restraint” on NSA”